There is a sense of temporary calm before a new storm. The Brexit saga remains in centre stage, and will continue to dictate the direction of the pound. As we mentioned yesterday, the MPs voted to reject a no-deal exit from the EU. Today, ministers will vote again to extend the Article 50, with an ultimate goal of drafting a new exit deal agreeable to both parties. 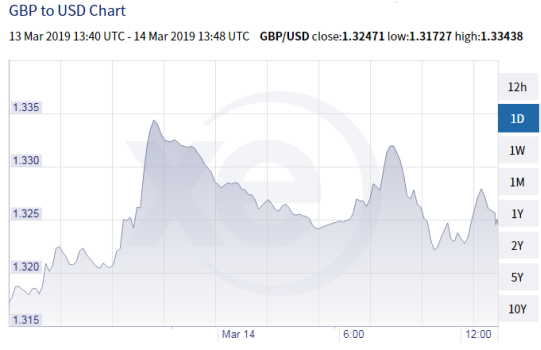 Oil prices touched a new high for 2019 as a result of disruption of supply and talks of extending the OPEC output cut. Tweets from the White House condemning recent spikes in crude oil prices and US dollar are likely to follow soon. The US Dollar Index is up 0.25% under a light economic calendar.

The Pound and the world markets continue to watch Brexit drama from the British Parliament where politicians are meeting again for yet another vote: this time to agree on an extension of the exit date along with concocting a real deal. GBP remains volatile after firming 2.45% against the greenback yesterday.

The Pound and the world markets continue to watch Brexit drama from the British Parliament where the right honourable friends are meeting again for yet another vote: this time to agree on an extension of the exit date along with concocting a real deal. GBP remains volatile after firming up by 2.45% against the greenback yesterday.

Politicians in the House of Commons voted to reject a no-deal split from the EU yesterday. They return to vote today on an extension of the Article 50. A short extension is very unlikely to yield a deal acceptable to both parties. It took nearly three years to draft a Withdrawal Agreement which was voted down twice. A longer extension will add more uncertainty for businesses and the Pound. GBP/USD is down 0.2% as we enter the NA session and is expected to remain very choppy.

EUR/USD is unable to maintain its four-day winning streak, down 0.3% on the day. The EU's economic calendar is very light and investors will be hoping the soft data out of China does not have a global spill-over effect. New developments around Brexit will once again dictate the pace and direction of euro.

USD/CAD halted a four-day slide and trading above the 1.33 levels following the releases of higher than expected US import prices (+0.6%) and New Housing Price Index in Canada falling for the first time since February 2018. The Index declined by 0.1%.

Non-resident speculation tax and measures to cool the housing market are the main drivers behind today’s numbers. We expect the loonie to attract bids however on the further back increases in WTI oil prices. Crude oil is trading at its highest level in four months after EIA reports showed a decline in oil stocks. The market will wait for BoC Deputy Governor Wilkins’ speech on risks to global growth for more trading impetus.

Meanwhile, away from all Brexit spectacle, Chinese data disappointed, dragging the equities markets lower. Antipodean currencies are under pressure, as Chinese demand for Australian exports like iron ore are crucial to the country's prosperity. The Aussie is down 0.5%.

The Japanese yen is trading at its lowest level in a week against the greenback. The Bank of Japan is widely expected to keep its monetary policy unchanged and may even tweak a bit a la ECB. Brexit developments may generate safe-haven demands, but the market is expected to trade within recent range ahead of the Bank of Japan's announcement.