Brexit continues to grip the attention of the market. PM Theresa May suffered another defeat in the House of Commons despite claims the second version was an improved offer. GBP USD recorded a wide trading range of nearly 2%.  The pair is now making timid recovery ahead of a second vote. The MPs will decide today if the UK will leave without a deal on March 29th. This option is likely to be rejected, leaving the option to extend the exit date. 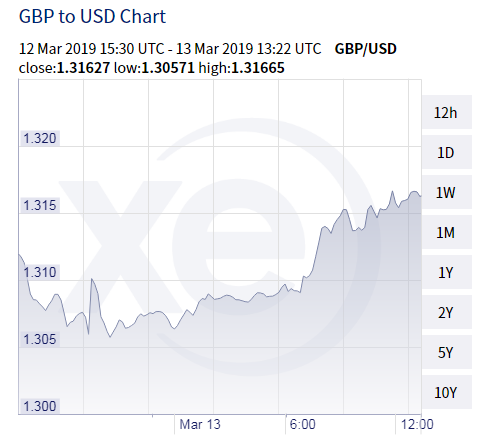 The Brexit drama continues to unfold in the British Parliament where the MPs are due to vote again today. PM Theresa May’s amended Withdrawal Plan was heavily defeated in the House of Commons. Today, the House will most likely reject a no-deal proposal and it is expected to vote for a third time tomorrow on an extension of the Brexit date. Whether the extension will be a matter of weeks, months, or years is to be determined.

With 16 days to go, it is becoming clearer that uncertainty over Brexit will stay with us for a significant period of time. The pound is in a temporary recovery mode, up 0.7% against the greenback. In the US, producer price index was up 0.1% in February whilst advance report on durable goods was up 0.4%.  Meanwhile, the market will be also keeping a tab on a slew of Chinese data to be released later today: retail sales, industrial production and employment data will provide further updates on the economic health.

UK Parliament voted down the last-minute Strasbourg Withdrawal Plan yesterday, sending the market in chaos. The MPs meet again to vote on a no-deal Brexit which is likely to be defeated, then paving the way for an extension of the Article 50 period. The British pound will continue to trade under a volatile session.

The Euro/US Dollar pair is trading around the 1.13 handle with the Brexit vote continuing to be the main driver for the currency. Italian quarterly unemployment rate increased 10.6%, above market expectations, while there was a welcome news from Germany. Industrial production was up 1.4% in January. The pair is staying near the four-day high and waits more development around Brexit.

The Canadian dollar is trading flat against the US dollar, looking for fresh direction after declining for four consecutive sessions. The Canadian loonie is being driven by global economic events and stronger oil prices. WTI is trading near an 8-day high, up 1.21% on the day.  The economic calendar is light today, and the market will be watch for Bank of Canada Deputy Governor Wilkins’ speech on risks to global growth scheduled for tomorrow.

The US dollar is trading higher, fetching 111.35 Yen after touching a low of 110.75. In Japan, investors will be watching for the Bank of Japan to maintain its current monetary policy in a climate of global economic slowdown. The central bank meets tomorrow and is likely to repeat the cautious message played by other central banks. Meanwhile, the Tertiary Industry Activity Index (+0.4%) was above market’s expectation of s decline of 0.3%.