Investors Play Safe Despite A Return to Market Calmness

EUR/USD has gone into a consolidation zone after bouncing back from its lowest level since April 2017. Sterling saw its temporary relief coming to an end after GDP report showed the UK contracted.

EUR/USD has gone into a consolidation zone after bouncing back from its lowest level since April 2017. The move was triggered by a general USD- selloff after China retaliated with an adjustment to the CNY. The euro bloc continues to spew poor economic data and there are concerns that politics in Italy could inject more uncertainty in the shared currency. For now, the pair seems to have largely ignored these macro shifts. The outlook remains bearish. 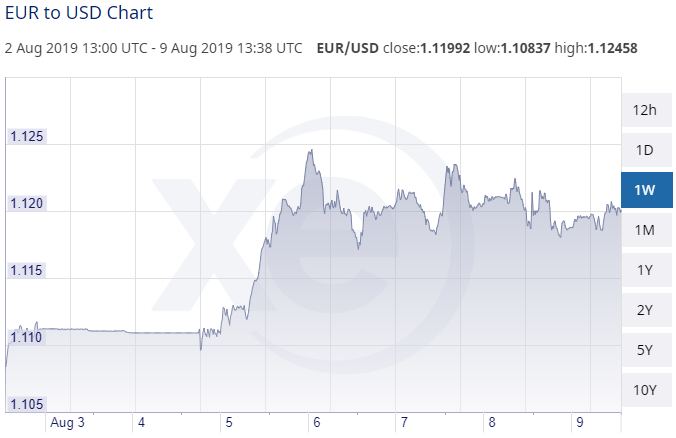 The US dollar index is moving within tight ranges and the GBP is the weakest among the G-10 currencies on the final session of the week. Soft GDP readings from the UK applied selling pressure on a beleaguered sterling, sending the GBP/USD pair to its lowest level since December 2016.

The market is also seeing a rebound in commodity-linked currencies propped by a recoil in WTI crude oil from a seven-month low.  Meanwhile, the US Fed could see its options to avoid a successive rate cut dwindling rapidly – the US producer price index declined 0.1% last month after recording an increase for five consecutive months. With an escalation in trade tensions and softer inflation, the central bank could be called again to provide additional insurance cut. We expect market moves to be subdued ahead of the long weekend with a bias for safe-haven assets.

The Sterling saw its temporary relief coming to an end after GDP report showed the UK contracted. GDP shrank 0.2% in Q2, reversing the 0.5% growth in the previous quarter and led by a sharp decline (1.4%) in the manufacturing sector. Meanwhile, the services sector eased to its weakest growth in three years. The readings are weaker than market estimates and the forecasts from the Bank of England. The GBP/USD had no other direction to go than south and is currently trading near levels last seen in January 2017.

EUR/USD continues its consolidation theme around the 1.1200 region despite the brewing political crisis in Italy and poor incoming data. The market may start to worry about political fallouts of a collapse of the Italian government. The country also recorded a sharp decline in its manufacturing industry. The June report saw output slipping 2.2% after a previous month growth of 1.6%. Along with the stagnation in Germany, economic growth in the euro bloc is starting to send signals of distress. The Euro is holding on to current levels – a drop from here could raise calls of currency manipulation ahead of US-EU trade talks.

USD/CAD halted its slide following weaker employment report card from Canada. The unemployment rate rose 0.2% and 24k jobs were lost largely as a result of a decline of 69k from the private sector. The market was expecting a net growth of 15k. The currency pair jumped higher on the headline news, but we expect further gains to be limited. WITI oil futures in bouncing higher, up 2.4% on the day and adding support to the loonie.

The Australian Dollar rose above 0.6800 mark, as it has been wont to do in recent weeks. Dovish remarks from RBA Governor Lowe, reduced economic and inflationary forecasts and a weak Producer Price Index all kept the Aussie dollar in familiar ranges.

The greenback remains under pressure versus traditional safe-haven Japanese Yen. USD/JPY is trading near the lower end of recent ranges as the market remains cautious despite relative calmness. The Japanese economy surprised the market, growing a faster pace than market estimates. The Q2 GDP grew by 0.4% bolstered by consumption activities ahead of October's sales tax decision. Uncertainty over the US-led trade tension endures and will keep JPY in focus.