G10 Currencies Racing to the Bottom Against Strong US Dollar

The Bank of Canada voted to keep its target for the overnight rate at 1 ¾ per cent. While the decision was priced in, the Canadian dollar tumbled lower after the central bank made a downward revision to its growth forecast. We are now expecting a meagre 1.2% GDP growth with growing uncertainty over trade relations, soft energy sector and lower consumption. USD/CAD moved to the upper end of recent trading ranges, and the Canadian loonie is expected to trade with a negative bias. 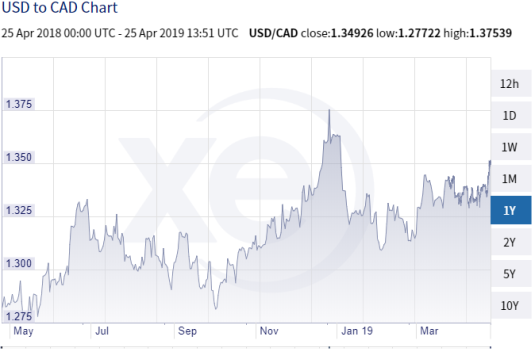 After a period of consolidation, it was a race to the bottom for the G10 currencies against the greenback. The US dollar index moved to its highest level for this year and with world economies (ex-US and China) slowing down, the recent rally may have more room to run. An advanced report on US manufacturers’ shipments, inventories and orders, released this morning, surprised the market to the upside. New orders for durable goods increased by 2.7% in March. The market has now turned its focus on tomorrow’s Q1 GDP report card. Meanwhile, central banks around the world are cautious. The Bank of Japan is the latest to follow the steps of Bank of Canada in maintaining its key monetary policies unchanged. NYMEX oil is at a six-month high. The market is searching for a new equilibrium after the US signalled that it will not extend waivers on Iranian oil exports.

The British Pound tumbles to a new low on the back of broad-based US dollar strength. Investors seem to be unimpressed with the latest CBI Survey which revealed that retail sales grew for the first time since November 2018. Post-recess Brexit negotiations are hardly adding to consumer comfort. UK’s exit from the EU continues to generate uncertainty for the economy and the pound.

EUR/USD is trading at its lowest level since June 2017 as the greenback continues to attract funds on strong economic fundamentals. US Durable Goods easily beat expectations this morning. The Eurozone, on the other hand, is struggling to get out of a boggy swamp of declining exports and low consumer confidence. We expect the pair to struggle at current levels ahead of US GDP report.

USD/CAD broke off its recent trading range, moving higher after the Bank of Canada doused any hope of rate hikes in the medium term. The BoC sees more headwinds in the energy sector, global slowdown and lower consumption and now projects lower real GDP growth of 1.2% for this year. The pair is expected to trade around current three-month high values, with stable oil prices providing temporary support to the loonie.

The Australian Dollar is following the downward lead of peer currencies. Inflation rates were disappointing, and the Aussie dipped below 0.70 for the first time since January before recovering slightly to 0.701 against the greenback. The NZD has fared a little better and is at 0.66256 after a low of 0.65822.

Dollar-yen returns below the 112 handle after reaching its highest level in four months. The Bank of Japan voted to maintain low rates “at least through around spring 2020”. The BoJ cited uncertainty in overseas economies and the scheduled consumption tax hike as the main reasons to stick to current monetary policies. Trade talks between the US and Japan are set to start and will be the main currency driver in the short term.

Sign Up and Get A Free Quote In Minutes