The British pound is the best performer among the major currencies, up 0.6% as the North American session opens. GBP/USD touched a fresh 2019 high after investors seem to view ongoing Brexit developments to be positive. The House of Commons is expected to hold another meaningful vote in two weeks’ time. Whilst we have few details of Plan B, the market is hopeful this revised Withdrawal Plan will receive the support from both the EU and the UK parliament. 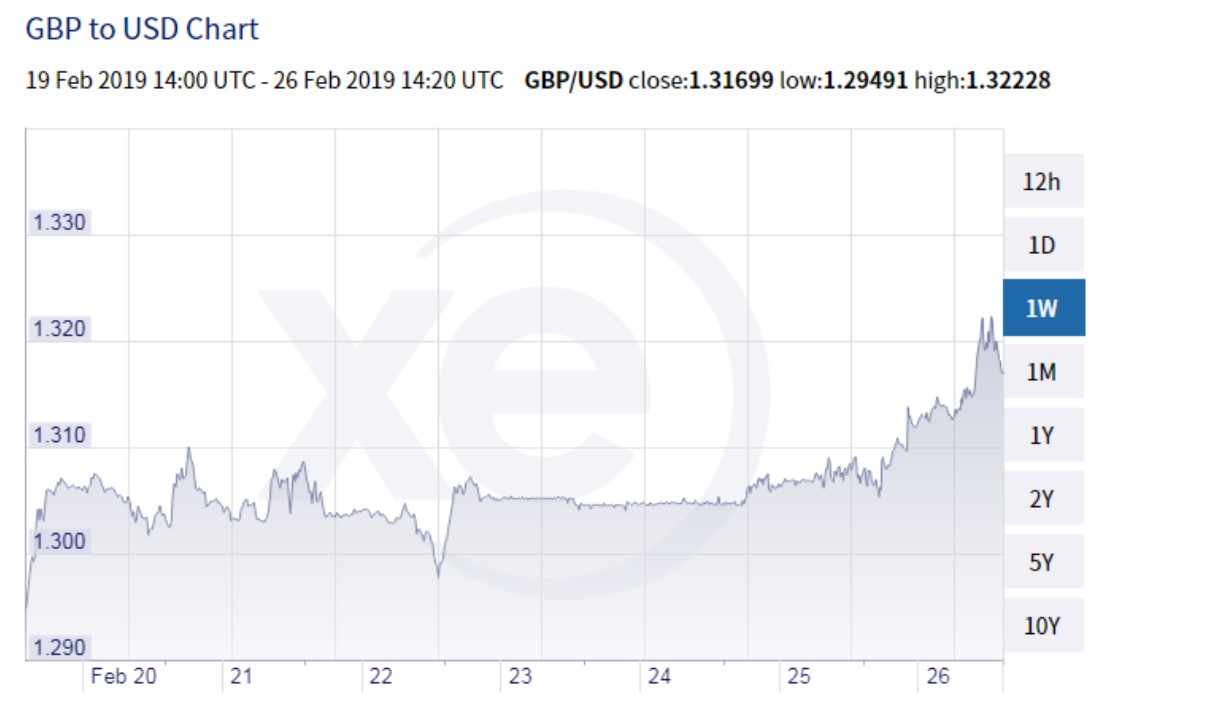 The greenback is trading with a slightly negative tone this morning, continuing its slide from last Friday. The market welcomed news that a trade agreement between the US and China is at near-horizon. We now expect attention to shift from tweets to the Capitol Hill where the Fed Chair Powell is delivering his semi-annual testimony. He is likely to preach the virtues of being “patient” amidst a weaker global economic outlook. The US economic fundamentals are strong, but the monetary policy is set for a short-term pause.

In the UK, Brexit continues to dominate headlines. The Pound extends its gains to move to its highest levels in four months. GBP/USD jumped on news that PM May is open to postponing Brexit and the opposition party is mulling the idea of a second referendum. Theresa May is hoping to present a new deal that “would work both for the EU and the UK”. The House of Commons will hold for a second meaningful vote on March 12th.

EUR/USD continues to trade within recent ranges around the mid-point of 1.13. There were no significant data releases out of the Eurozone. GfK Consumer Climate revealed economic expectations in Germany are sliding lower, its fifth decline in a row. The country has avoided a technical recession, but the economic risks remain elevated. On the other hand, income expectations are still high with rising employment, leading to rising wages.

The Canadian loonie is under pressure for the second successive session as the market waits for the testimony from the Fed Chair Powell. The WTI came under selling pressure yesterday, dropping 4.25% after US President criticised recent moves in crude prices. NYMEX WTI has appreciated by 22% YTD.

AUD/USD is bouncing back after collapsing nearly 2% yesterday. China’s Dalian port has banned coal imports from Australia “indefinitely”. We expect the pair to trade with a bearish bias as authorities work on a solution to the coal crisis.

The Japanese yen is trading with a firmer footing today after slipping to a 2019- low yesterday. Equity markets are in the red ahead of key testimony from Powell. Market participants are likely to assess the tone of the message which could set the direction of the currency pair.