The Dollar Index is in negative territory, down 0.15% as we move into the final week of Q1 EUR/USD trading higher on the back of an improving IFO reading

The Canadian dollar returns above the 1.34 handle after recent soft data. Retail sales number was disappointing, and with an inversion in the yield curve, investors are showing concerns about growth. The GDP number due this Friday will be at the centre stage. USD/CAD is expected to trade higher with an eye on the 1.35 post, as a recent rally in the WTI begins to fade away. 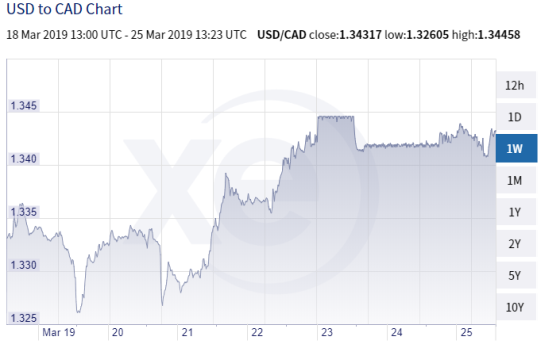 The inversion of the US Treasury yield curve is the most compelling talk of the town today. The fear of an imminent recession is driving global equity markets lower. The Nikkei ended the session down 3.01%, European indices are in the red and US futures markets are pointing to a similar scenario.  The US dollar is trading with a soft tone against the major currencies: The EUR is higher after better than expected IFO reading. The economic calendar is very light today and the market will be vulnerable noises. We will also hear a series of Fed speakers this week after last FOMC meeting delivered a rather dovish hold. WTI is trading near $58.80, 0.3% lower as the market assess the real concerns of stalling global growth. Gold is up 0.4% and safe haven assets will attract the flow of safe-haven funds.

In the UK, the Brexit drama continues to weigh on the Sterling. The market now waits to see if there will be a third Meaningful vote this week, on a “new” Withdrawal Plan. Last week, the EC agreed to extend Article 50 until May 22nd, assuming the exit plan is approved by the MPs. In case of a new disagreement, they have till April 12th to “indicate a way forward”. So Members of Parliament rejected everything thrown at them without proposing a concrete solution. The sterling remains very volatile.

Finally, we have some relatively good news out of the Eurozone. Though this is hardly tier 1 data, IFO Business Climate rose for the first time after recording six consecutive declines. The market is now hoping that the German economy will recover strength, as with companies starting to become more optimistic for coming months. The consumer confidence index improved from 98.7 to 99.6 points, enough to strengthen the euro against the greenback. EUR/USD closed a rough week 1.54% lower.

The Canadian dollar is weak against the major currencies on the first session of the week. USD/CAD moved back above the 1.34 handle after reports showed Canadian retail sales sank for the third month in a row. Investors will be closely watching for GDP due this Friday for a major market move. We expect the pair to trade along global market sentiment today.

The NZD direction will be dictated by Wednesday’s RBNZ MPS ahead of Thursday’s business confidence data release and RBNZ Gov Adrian Orr’s speech on the future of New Zealand’s monetary policy framework due for release on Friday morning.

Global equity markets are trading with fear this morning. Investors are concerned about inversion in the yield curve and are showing a preference for safe-haven assets: Gold is up $6, and JPY has strengthened 0.13% today to sit on a crucial 110 psychological level.

Earlier, the Japanese all-industries activity index dropped for the third time. Later today, the Bank of Japan Summary of Opinions will reveal new projection for inflation and growth and likely to inject more trading impetus.