Fasten Your Seat Belts, Sharp Brexit Curves Are Ahead

MPs return to Westminster today and will attempt to avoid a no-deal Brexit, seek an extension to UK-EU exit before the Parliament is prorogued.

GBP cracked under pressure and uncertainty over the risk of another election in the UK and a hard Brexit. GBP/USD tumbled to its lowest level since 2016. MPs return to Westminster today and will attempt to avoid a no-deal Brexit, seek an extension to UK-EU exit before the Parliament is prorogued. There are multiple scenarios at play, and it could be a bumpy ride for the Cable over the next few weeks. Conservative MP Philip Lee walked across the floor to join the Liberal party, eliminating PM Boris Johnson's parliamentary majority. 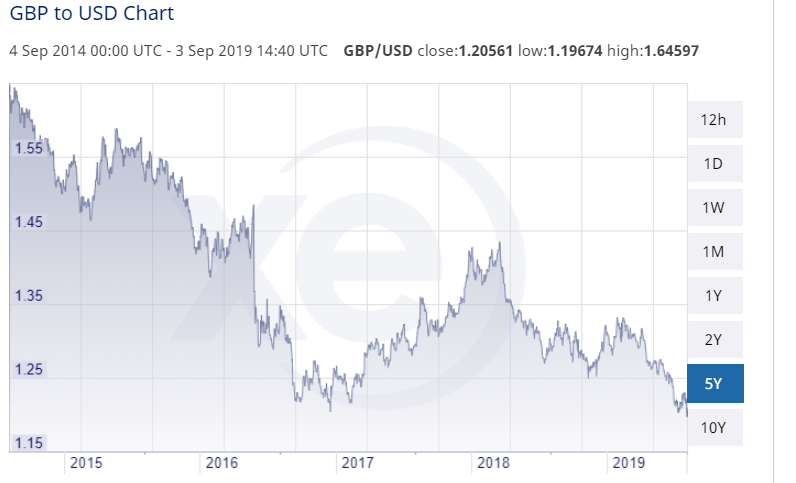 The US Dollar continues to flex its muscles against the major currencies with the British pound trading at its lowest level since September 2016.

All the options are on the table, implying thereby a volatile outlook for the pound. Meanwhile, trade tensions linger on between China and the US. September sees the new tariffs coming into play. The market will be hoping that the scheduled trade talks bring serenity to the relationship.  Commodity currencies are trading with a downside bias with WTI crude oil losing 1.2% as we enter the NA session.

Brexit turmoil continues to dominate the headlines in a week which could trigger a series of scenarios in the UK – election, delay and extension in the UK-EU exit process, a hard no-deal Brexit, or a miraculous divorce with an agreed future arrangement between the two partners.

British Parliament returned from the recess today and the pound succumbed under pressure over the fate of Brexit. PM Johnson is adamant of leaving the EU on October 31st, rejecting any offer to ask for further extensions. Suffice to say, the Pound is expected to see volatile sessions over coming weeks as uncertainty grows, and drama plays on at Westminster.

The euro-dollar pair plunged to its lowest level since April 2017, dropping below key psychological level of 1.1000. The drop is the result of ripples of renewed uncertainty from Brexit, growing fear of recession in the Eurozone and political uncertainty in Italy. EUR/USD is expected to be under pressure this week.

The Canadian loonie starts the final month of Q3 on a weak footing, down 0.22% against the greenback. Oil futures, the main driver of the CAD, is trading with a negative tone this morning, after the month in the red for two consecutive months. We expect the market to move into a wait and see mode ahead of the Bank of Canada meeting. The central bank is expected to hold its rates at 1.75% tomorrow.

The AUDUSD pair dropped below  0.67 during the early trading hours of the Asian session. Yet the Aussie rallied on the Reserve Bank of Australia's (RBA) positive sentiments. As of writing, the pair was up 0.28% on the day at 0.67513.

The dollar-yen is trading in a narrow, familiar range after closing the previous month 4.5% lower. The economic docket is light today with US ISM and FOMC member Rosengren to provide some trading stimulus. However, uncertainty over trade relations between China and the US lingers on. Investors will prefer to wait, avoid heavy directional bets and have a slight bias for safe-haven assets.