The USD wasn't among the many Democratic candidates debating last night, but it is under pressure. We know, currency can't talk, but there were so may debaters!

Oil prices have steadied near this week low whilst spot gold has added $7.75 to trade near $1490/oz. Sentiment remains fragile and we could see a tendency to switch towards safe-haven assets as we move closer towards the end of the week. Besides the ongoing trade tussle between the US and China, Brexit headlines continue to dominate market sentiment. Yesterday, the cable rose to a five-month high, peaking at $1.2840. Optimism over an agreed exit plan is fading rather quickly this morning and coupled with profit-taking activities, GBP is doing a rollercoaster impression vs the dollar. 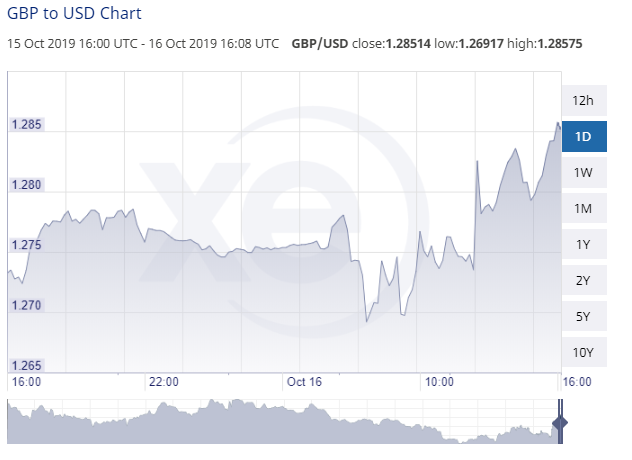 The greenback is under pressure this morning, trading lower against most of its major peers. Advance estimates of U.S. retail sales for September recorded a surprising decline of 0.3%. The market was expecting a growth of 3%.

The cable is retreating from yesterday’s high and with Brexit is 15 days away, there is still a lack of clarity on the way forward. As a result, market sentiment remains volatile and the market is highly sensitive to contradictory statements. Meanwhile, EU-UK officials burned the midnight oil to try and pull out a miraculous, last-minute exit deal.

EU leaders meet for key summit tomorrow and the next few days could be crucial for the UK’s Prime Minister, the pound and the future relationship between the UK and EU. At home, PM Johnson has more ground to cover and gather cross-parties support in Parliament to pull the country out of the EU on October 31st.

EUR/USD continues its consolidation theme, trading around the mid-point of 1.10s. The pair is waiting for major Brexit breakthrough and also remains cautious over as escalation of tension between China and the US. Domestic data is also placing on a lid on further upside move for the shared currency. The market is hoping to see concrete fiscal measures from Germany to pull the economy of a recent slump. The EU Summit starts tomorrow and the outcome from discussions will be the key currency driver.

Canada produced its inflation report card for the month of September this morning. Data from Stats Canada showed the consumer price index (CPI) rose 1.9% (beating estimates 1.8%) on a year-over-year basis last month. Consumers are paying 5.5% more for meat. The incoming data did little to support the loonie. USD/CAD remains inside yesterday’s trading range and consolidating within 30-pips move. The Bank of Canada meets at the end of the month and we expect the central bank to remain neutral, keeping rates unchanged at 1 ¾ percent.

AUD USD continues to dwell in the shade as the US-China trade talks and Brexit continues to be the shiny, everlasting objects of attention. The Aussie is hovering around 0.672.

USD/JPY is shedding overnight gains, trading 0.15% lower. The trade tussle between the U.S. and China and Brexit headlines once again dictate the market sentiment. As of this morning, both blocs have yet to come to an agreement for either a partial trade deal or an exit plan, inducing investors to move into safe-haven currencies such as the CHF and JPY.