The currency market mood has switched to risk-off with the escalation of geopolitical tensions in the Gulf region. EU leaders push Irish backstop dilemma

Crude oil prices are trading 8.4% higher this morning, but coming off a four-month high, in reaction to drone attacks on Saudi Arabia oil production facilities. The currency market mood has switched to risk-off with the escalation of geopolitical tensions in the Gulf region. Equity indices are mixed and traditional safe assets are attracting inflows – spot gold is trading 1% higher and USD/JPY has gapped lower. 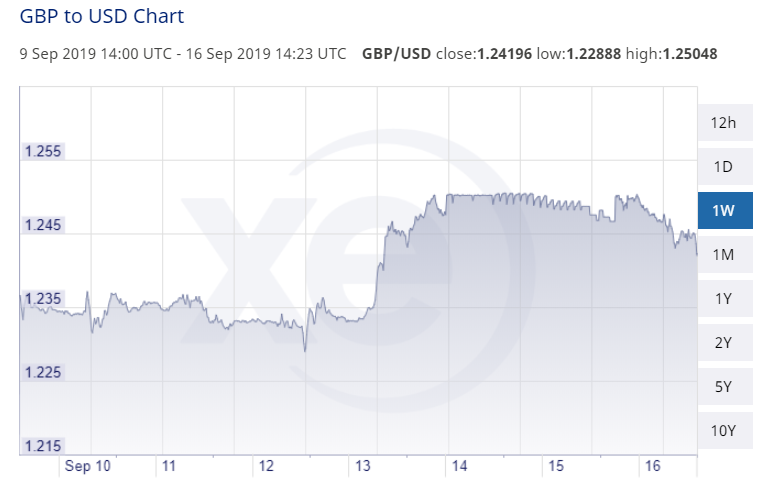 This week's central focus remains central bank announcements: The FOMC concludes its two-day meeting and another 25-basis point rate cut is expected while the Bank of England and BOJ are expected to keep their powder dry and hold rates steady. The economic calendar is light today leaving the market vulnerable to developments in the Middle East, the ongoing US-China trade talks and the Brexit saga.

The British Pound is easing from a seven-week high – on the back of profit-taking activities and concerns that the UK will be unable to secure a fresh exit deal on its terms from the EU. The two partners are meeting again to explore new avenues but are still afar from a breakthrough. We expect the GBP/USD to remain as sensitive as ever to developments surrounding Brexit and central bank announcements.

EUR/USD started the week in negative territory, down 0.25%, just a touch below 1.1050. The ECB failed to impress the market with its new stimulus package, deemed as not enough to kickstart a sustainable economic growth. We suspect the market will explore the lower levels around the 1.10s in the absence of any market-moving data today.

USD/CAD sits around the mid-point of 1.32s after the market turned cautious amidst rising geopolitical risks. Canada will release its July foreign securities purchase report today and we expect little movement in the currency pair. Instead, we should see a recalibration in the market ahead of key Fed meeting and the loonie to trade broadly along with the global market sentiments.

Currency investors seem to be holding off on the Australian dollar at the moment, reluctant to take a risk in advance of Tuesday's minutes from the Reserve Bank of Australia. AUD/USD sputtered on its climb towards 0.69 and sits at 0.68584.

The greenback failed to sustain its rally versus the Japanese yen as attacks on Saudi Arabian oil refineries hindered risk appetite. USD/JPY fell lower to its lowest level in three sessions. Concerns of disruption to global oil supply, key announcements from central banks around the world and recent mixed data from China are likely to encourage investors to shift their funds to safe-haven assets.