Currency Markets, Like the Raptors, Won't Back Down Despite Mixed Sentiment

Much like your Toronto Raptors, currency investors are keeping their eyes on the prize and have a game plan for victory.

The British Pound is under significant selling pressure today, driven by lower GDP readings. Economic growth in the UK has weakened with the economy shrinking by 0.4% in April. The production index declined by 2.7%. The production industry’s weight is 13.8% of the GDP, hence adding to negative sentiment. The GBP/USD also waits for the result of Britain's leadership election which will have a major impact on the next leg of Brexit. The medium-term outlook remains bearish. 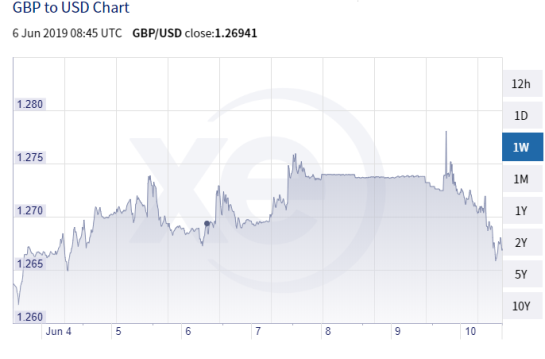 Financial markets are in a buoyant mood after the Trump Administration called off its threat to tax imports from Mexico. The Mexican peso climbed higher, soaring to an eight-day high. The greenback is also trading higher, on a trade-weighted basis, against most major currencies. It is getting relief from softer non-farm payroll induced sell-off.  However, we expect the feel-good sentiment to switch to caution. The war of words between Beijing and Washington is widening the chasm between the world's two largest economies. Chinese import data is already showing signs of strain, contracting in May and 8.5% lower from the previous year. The economic calendar is light today, and the currency market is expected to consolidate ahead of the release of the all-important inflation number this Wednesday.

The Sterling returned into negative territory following the release of weak monthly GDP data. GDP contracted by 0.4% in April as a result of “dramatic” fall in automotive production. The manufacturing sector weighed negatively on the data, decreasing by 3.9%. As Britain searches for a new PM, GBP/USD is expected to show episodes of heightened volatility.

EUR/USD is giving away recent gains after scaling to a three-month high. The European session was thin in liquidity with German and French markets closed. There is a lack of follow-through on Friday’s poor US job data. Italian industrial production declined by 0.7% in April and failed to provide much-needed support to the shared currency. We expect the pair to consolidate around current levels as the market looks for clear direction.

USD/CAD is recovering timidly, after crashing below the key technical 200-day average. USD bulls are back in action after planned tariffs against Mexico were cancelled, paving way for a smooth USMCA transition. The loonie is also under pressure this morning following mixed housing numbers.  Building permits recorded its largest increase since May 2007 ahead of an increase in development costs in BC. On the other hand, housing starts in May were down by a whopping 13.3% from the previous month.

AUD USD dipped below 0.70 in today's trading, mostly on the strength of USD. Early in Tuesday's Asian session, the National Australian Bank will release its Business Confidence Index numbers, which should set the tone and direction for the Aussie for this week.

The market is trading with a risk-off sentiment, pushing the Yen lower against a resurgent US dollar. USD/JPY is up 0.4% after tariffs on Mexican imports were averted. Meanwhile, there is mixed data out of Japan: GDP was unchanged at 0.6% and the trade deficit was wider than expected. Governor Kuroda joined the chorus of global central bankers, signalling the Bank of Japan is ready to implement stimulus to its flagging economy.

Moving funds between international accounts?
Sign up for XE Money Transfer and transfer money online 24/7.
Get a fast, free online quote, so you know your costs before you book a transfer.

This post was originally published on the XE Market Analysis Community.