The Dollar Index sits atop a 2-week high as the FOMC deliberates its next move. USD/CAD is trading north of 1.34 ahead of the Canadian inflation report card

USD/CAD returns to familiar 1.34-1.35 ranges after making a quick detour to a three-month low. Investors have now moved into a cautious mood, happy to see the pair range trading ahead of a key decision from the Fed. The next FOMC move will likely have a domino effect on decisions from other central banks. Escalation of trade tensions between the US and China has injected huge uncertainty on global growth. The pair is expected to see heightened volatility are we hit the mid-week. 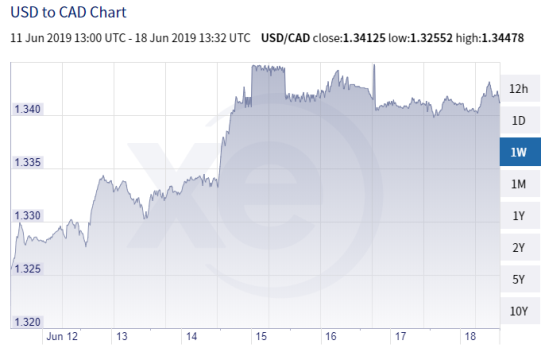 The greenback is trading broadly higher as the Federal Reserve gets set to begin its two-day meeting. The Fed is widely expected to deliver another “patient hold”. However, the market will be closely watching for the updated economic projections and looking for signs of future rates heading lower by the end of this year. FOMC members are hoping that the ongoing trade frictions between the US and several of its partners are contained, allowing for sustainable growth, without any prop from the central bank. The economic calendar is relatively thin today, and we expect the currency market to trade within recent familiar ranges ahead of the Fed announcement.

GBP/USD is trading with a negative sentiment over growing fear of the prospect of a hard Brexit. GBP/USD is oscillating around a five-month low. UK waits for its new PM to lead them out of the EU. The market seems to be pricing in a scenario of no-deal exit on October 31st. Investors will keep an eye on the Bank of England, which is due to announce a no-change decision on interest rates this Thursday. The pair is expected to remain under a bearish cloud cover.

Negative economic sentiment from the Eurozone is hurting the shared currency today. EUR/USD is down 0.25% on the day after the ZEW Indicator for Economic Sentiment for Germany declined to minus 21.1 points. Global trade tensions, geopolitical risks and fear of a hard Brexit scenario are sharpening the appetite for Euro bears. ECB Chief Draghi issued fresh signal this morning, saying the central bank can turn to more stimulus tools to support the regional bloc.

USD/CAD has stalled after bouncing from its lowest level in three months. Investors have turned cautious ahead of twin event risks: the release of key Canadian inflation data and the FOMC announcement. Canadian manufacturing sales fell 0.6% in April and inventory levels recorded a fifth consecutive increase according to the latest release from Statistics Canada. We expect negative sentiment to weigh on the CAD and a soft CPI number tomorrow amidst global trade tensions will likely fuel talks of a rate cut from the Bank of Canada.

AUD USD bounced back following meeting minutes released by the Reserve Bank of Australia. The Aussie had touched five-month lows, but now is trading in the mid 0.68's. The Bank suggested economic policy easing, and the bears are following the dovish minutes.

USD/JPY is in a consolidation mood after collapsing to a recent five-month low. This was led by safe-haven related flows amidst escalating trade tensions between the US and China. The primary focus for currency investors will be on the Fed decision. The Bank of Japan also meets this Thursday, while the market remains on standby mode to re-assess the possibility of convergence or divergence in monetary policy.