Currency Markets Tee off A Short Week with Caution

The pound sterling starts the week, holding the crown as the best performing currency. Investors will be focusing on key data releases this week, but Brexit is likely to play at the back of their minds. There is a new hope that MPs will take the House recess as an opportunity to agree on an alternative to the existing Withdrawal Plan. The pair is expected to be choppy as we move into the upcoming sessions. 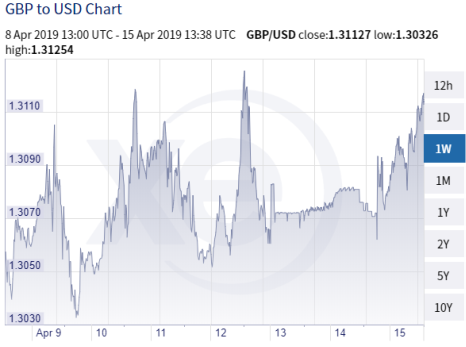 Currency market tees off a short week with a note of cautious optimism. Safe haven assets are trading lower with gold losing $6 an ounce and JPY dropping to its lowest level in five weeks. The market is pricing in an imminent trade deal between China and the US. Mnuchin, the US Treasury Secretary, signalled that officials from both sides are ironing out the final differences and the US economy remains strong despite murmurs of a global economic slowdown. The economic calendar is light today and we expect the market to remain within familiar ranges.

The Pound is also riding a new wave of Brexit optimism. The House of Commons returns from recess next Tuesday whilst there are ongoing cross-party negotiations to find a breakthrough to the current impasse.

GBP/USD is trading firmer, up 0.35% on the day and the focus this week will switch to key fundamental data. Investors will be taking the pulse of an economy, marred by Brexit chaos, with the release of inflation, retail sales and employment numbers. Meanwhile, MPs across parties are expected to discuss further in a bid to crack the Brexit enigma.

The European currency is moving within a close range in the absence of any significant data releases. The latest monthly report from Bundesbank didn't reveal any noteworthy new information: The German economy is expected to produce subdued growth over concerns of a global slowdown and ongoing uncertainty over Brexit.

The USD/CAD pair returns inside recent trading ranges around the 1.33 handle. Investors are eagerly waiting for the release of the Bank of Canada Business Outlook Survey. Meanwhile, WTI crude oil is in consolidation mode after reaching a peak to its highest level in five months last week.

Stuart Talman from our Foreign Exchange corporate trading team wrote some compelling commentary to recap the rising Australian dollar and the forces which are pushing it higher relative to peer currencies.

USD/JPY has moved into a consolidation phase after clocking a four-month high. The Nikkei closed 1.37% higher as investors’ sentiment swing to risk-on appetite. There is a measured hope that trade tension between the US and China is receding. The pair is expected to trade at current levels with no tier-1 data for release today.

Sign Up and Get a Free Quote In Minutes