The Euro is trading near a two-week high against the greenback, fuelled by the better sentiment over the eurozone. The ZEW Indicator for Germany was the latest to signal improving expectations. The market has its proverbial fingers crossed a soft UK-EU divorce after the House of Commons rejected a “no-deal” exit scenario. EUR-USD now waits for the Fed decision which will be a significant market mover later today. 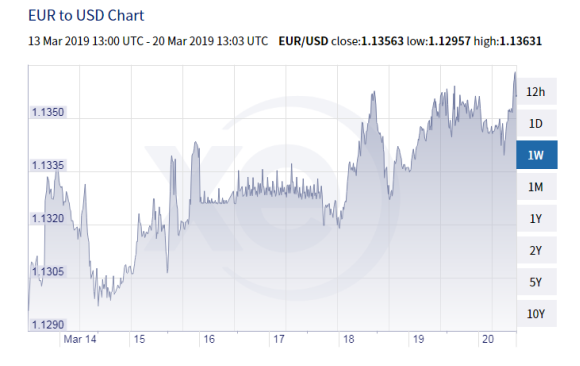 The FOMC meeting is the highlight of today’s session with market pricing in a no change decision. Investors will be sifting through the updated economic projections and press conference, injecting volatility into the currency market. The greenback meanwhile remains soft, trading near a two-week low against the G-10 currencies. WTI oil prices have steadied around a four-month high and commodities investors are waiting for the latest EIA inventories report for further direction. Crude prices have strengthened $15 a barrel since January 2019 amidst increasing concerns of tighter global supplies.

The British pound continues to be vulnerable to the ongoing Brexit drama and is down 0.35% against the USD as we move into the North American session. The UK PM is expected to seek an extension to the exit date, hoping to present a better plan to the House of Commons. GBP/USD is trading with a negative sentiment as investors are growing increasingly impatient with the recent Brexit developments. The PM hopes to have the opportunity to quickly draft a new Withdrawal Plan, and she has reportedly rejected the idea of having a long extension to Article 50. Businesses are hoping for more clarity. Meanwhile, inflation for the past 12-month edged higher to 1.9% in February, up from 1.8% in the previous month. The pound remains highly vulnerable to ongoing political stress over Brexit and Fed decisions.

The euro maintains a firm tone against the US dollar as investors turn cautious ahead of the Fed decision and with media reporting doubts over smooth Sino-US trade talks. Data released earlier today shows German producer prices for industrial products decreased 0.1% in February against the previous month.

The main event remains the FOMC and market will be closely monitoring for any shift in the dot plot as a gauge on future rate hikes.

Canadian budget came in as a non-event failing to inspire the business community. The loonie saw its gains against the greenback evaporating with the pair now hugging the mid-point of 1.33 levels. The commodity-sensitive CAD will be driven by incoming crude oil data and news out of this afternoon's US Federal Reserve announcements.

There was little reaction to Monday's RBA minutes, in which policymakers reiterated that there wasn't a strong case for a move in the policy rate in the near term. There remains significant uncertainty on the economic outlook. The RBA expressed concern over the health of the domestic housing sector, along with underwhelming economic growth.

The recent rise in dairy prices continues with this yesterday's Global Dairy Trade (GDT) auction resulting in an eighth consecutive increase in prices.

Yesterday's event concluded with the overall index up 1.9%.

USD-JPY remains trapped in The Consolidation Zone and is trading around the midpoint of 111. Reports that US-China trade talks have hit a roadblock sent investors scurrying for safe-haven assets earlier today. The Bank of Japan released the minutes of its last monetary policy meeting and believed the economy remains on a track of moderate expansion. We expect policy diversion to come into play after the Fed meeting later today.