The Currency Market is Nervous about Taxes on Tequila, Tamales and Guacamole

Mexican and US officials are due to meet to try to diffuse another trade flare-up between the two nations to avoid imminent tax on Mexican imports.

The EUR/USD pair climbed to a two-month high, carried by a general weakness in the US dollar. The market believes that the Fed is turning dovish, following recent comments from  Powell.

The market's focus as the week moves on will be on Friday’s non-farm payroll data. The slightest hint of weakness will exacerbate more selling for the greenback. Growth in the Eurozone is still fragile. Escalating trading tensions will likely inject more uncertainty and keep investment at low levels. The shared currency is expected to trade cautiously around current levels ahead of ECB meeting due tomorrow. 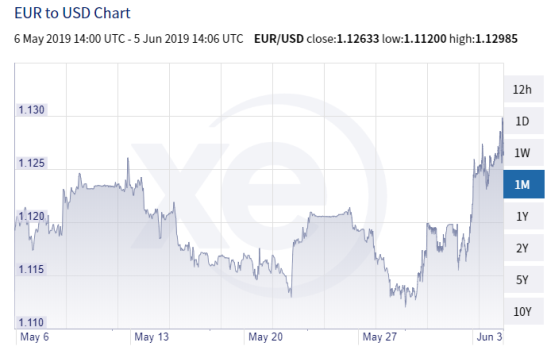 The US dollar is on shaky ground, losing against the G-10 currencies this morning. Fed Chair Powell’s comments triggered a broad sell-off after he signalled that the central bank will “act as appropriate to sustain the expansion”. The market reacted quickly, taking it as a cue that the Fed is running out of patience and could move towards easing its monetary policy.

Protracted trade tensions and recent soft data are also starting to undermine the greenback. The ADP Non-Farm employment report disappointed, as private sector job gains increasing by 27,000. This was far below market consensus of 185,000. The market remains cautious amidst growing trade tensions.

Mexican and US officials are due to meet to try to diffuse another trade flare-up between the two nations and avoid an imminent tax on Mexican imports like guacamole, tequila, and even cars and auto parts.  Gold is trading 1.20% higher and traditional safe-haven currencies are also on a firm footing.

The Sterling joins other major currencies in the party, trading 0.20% higher against the greenback. GBP/USD now extends its gains for the four consecutive sessions. Brexit seems to have taken a pause. The market focus is on dovish comments from Powell. A pick-up in the service sector is also adding to a temporary positive mood around the Pound. The UK Services PMI moved to 51.0 in May, signalling a marginal increase for the second month.  We expect the pair to trade around current levels with Brexit uncertainty capping any further gains.

EUR/USD is chipping on the 1.13 mark, buoyed by slightly better than expected PMI reading and amidst a general weakness in the US dollar. Eurozone PMI Composite Output Index rose to 51.8 last month, its highest reading in three months, on the back of a strong service sector. Germany also recorded growth, easing fears of a recession. The economic conditions remain fragile. The European Central Bank meets tomorrow and market may adopt a wait and see strategy before any policy update announcement.

USD/CAD plummets to a two-week low after the market increased its bets that the Fed would be open to rate cuts.  The greenback is unable to halt its slide, down 0.2% against the loonie. Trade tensions and disappointing ADP employment report are the main drivers today. The Canadian dollar is expected to trade along with the general market sentiment, ignoring soft performance in the oil futures market.

The Australian dollar peeked over the 0.70 level relative to the US dollar today and is now hovering just below at 0.698. This is despite an underwhelming GDP forecast for Australia, which was reported at 0.4% growth for the first quarter, albeit an improvement over the previous estimate of 0.2%.

Dovish comments from Fed Bullard and Powell triggered a general USD sell-off, pushing the USD/JPY to a five-month low. Investors are turning increasingly cautious: trade tensions between Beijing and Washington are expected to linger longer with both parties turning the knob to higher non-trade pressures. A disappointing ADP report is also undermining any prospects of an immediate rebound in the US dollar.

Moving funds between international accounts?
Sign up for XE Money Transfer and transfer money online 24/7/365.
You get free online quotes, so you know your costs before you book a transfer.

Sign Up and Get a Free Quote In 5 Minutes