Across the Atlantic, it will be a pivotal week for the British Pound: British Parliament is set to be prorogued with a scheduled return on Monday 14th. The six-week-old UK government is facing in-party and outside opposition, pressures to back down from a no-deal exit strategy.

The Euro awaits the ECB’s monetary policy decision this Thursday. The central bank is likely to announce a new series of stimulus packages to try to pull the Bloc out of the economic morass. We should expect a quiet Monday in the absence of major data releases. 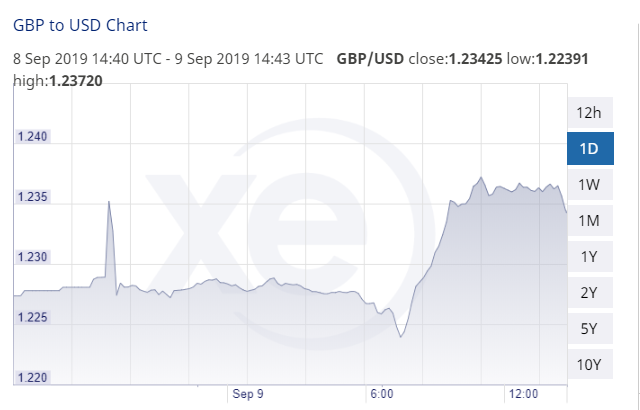 It was a rough beginning of September for the greenback with the US dollar index closing in the negative territory. The US Employment report missed market estimates on Friday sending the greenback lower against most G-10 currencies.

BREAKING: U.S. employers added a modest 130,000 jobs in August, a sign that global economic weakness and President Trump's trade war with China may have begun to slow hiring. The job gains were lifted by the hiring of temporary Census workers. https://t.co/E2F3hy6dZv
— The Associated Press (@AP) September 6, 2019

GBP/USD printed a new high above 1.2350, buoyed by fresh optimism over Brexit and a return to growth in the services sector. The UK GDP expanded by 0.3% in July, supported by broad-based gains except for agriculture. Just recently, immensely popular and charismatic Speaker of the House, John Bercow announced his intention to step down from his position on October 31st.

The three month-growth was, however, flat after contracting 0.2% in Q2. The cable is expected to enter the transition phase as market participants focus on the deliberations at Westminster. Today, the Benn-Burt Bill is expected to become a law, thereby forcing the government to either secure a new withdrawal agreement with the EU or seek an extension for a further four months. The Johnson Government is, on the other hand, likely to call for a fresh general election.

The Euro continues to march higher amidst broad-based US dollar weakness. EUR/USD is trading 0.3% higher around the mid-point of1.1050. The Sentix survey revealed a slight improvement in the economic situation in Eurozone. The index, at minus 11/1, however, points to recession risks for the area. We expect the pair to move into a consolidation phase ahead of ECB announcement (Thursday).

The Canadian economy surprised the market after job reports showed employment rose by 81k in August, albeit mostly fuelled by part-time jobs. USD/CAD now sits near a six-week low. Risk-on appetite has returned following positive comments on trade relations between China and the US. The economic calendar is light today and so we expect the pair to trade along with the general market sentiment.

The Australian Dollar is holding tight to month-long highs and is trading just above 0.6865.

A return to risk-appetite sees the US dollar pushing higher against the Japanese Yen. USD/JPY is knocking on the 107 post, a six-week high. In Japan, the Economic Watchers Sentiment index improved to 42.8 whilst local data matched the market’s estimates: Q2 GDP matched estimate at 0.3%. Market is expected to keep an eye peeled for new developments around US-China trade talks before taking the next directional leg.