The focus of the currency markets this week will be on Australian business confidence numbers, Bank of Canada interest rates and Powell's Fed announcement.

All eyes will be cast on the Canadian loonie this Wednesday. The Bank of Canada is expected to deliver a no-change decision, holding rates at 1.75%. However, the Committee may point to growing downside risks, economic slack amidst trade tensions with China. The price of crude oil has been a major driver, pushing the CAD to an eight-month high against the US dollar. We expect the USD/CAD to consolidate ahead of the key announcement. 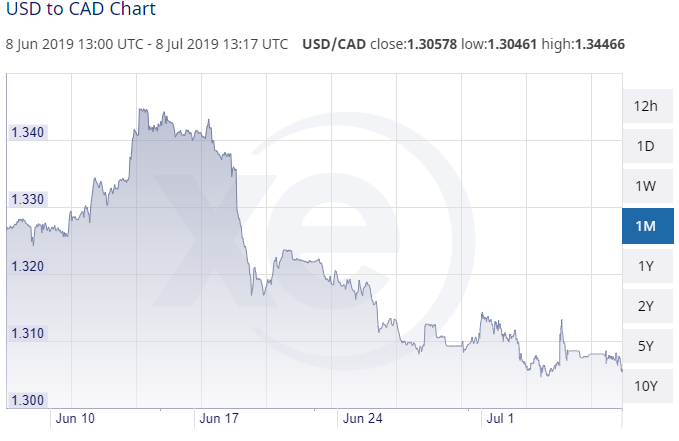 The greenback, re-energised by Friday’s solid employment data retains its seat near a three-week high against most major currencies. Total non-farm payroll, at 224k for June, easily beat market estimates. All eyes will be now on Capitol Hill this mid-week, where the Fed Chair Powell will deliver his semi-annual monetary policy report. The Fed is expected to tweak its policy with an “insurance cut” of 25 basis points in the medium term. The global economy faces growing downside risks and uncertainty over the US-centric trade war.  The economic calendar is light today and the currency market is expected to thread the waters with caution.

The pound continues to suffer from home-grown political uncertainty over Brexit. Economic data has been subdued and we expect the GDP report due for release this Wednesday to show signs of fatigue.

GBP/USD is expected to consolidate around the 1.25 post with an eye on the lows last seen in December 2018.

EUR/USD is trading relatively flat after dropping nearly 1.5% last week. The euro-zone is stagnating, and some ECB members are starting to voice concerns, encouraging the central bank to expand its accommodative monetary policy. This morning, the Sentix economic index dropped to its lowest level (minus 5.8) in nearly five years. Investors remain cautious over prospects of a prolonged trade war.  The pair is expected to form a base around the 1.12 levels.

USD/CAD is consolidating around the mid-point of 1.30 as investors look for clear direction. Canadian job reports continue to be volatile with 2,200 jobs lost when the market was anticipating a rise of 10k. The Bank of Canada meets this Wednesday and is widely expected to leave its policy rate unchanged at 1.75%. WTI oil futures prices rose by 18% last month alone and are expected to support commodity-linked loonie.

AUD USD slipped just under 0.70 and is expected to consolidate in this key round, at least until Business Confidence and Business Conditions Index numbers are released by the National Bank of Australia.

The Japanese Yen is trading with a negative bias this morning as a resurgent US dollar continues its three-week surge. Economic data out of Japan did not help either: machinery orders dropped by 7.8% month over a month whilst the Economic Watchers Sentiment index showed no signs of solid improvement (44 versus 43.9 expected). USD/JPY is expected to hold around current levels ahead of Powell’s testimony this mid-week.