The market's mood switched to a cautious mode after an escalation in trade tensions between the US and China.

The market's mood switched to a cautious mode after an escalation in trade tensions between the US and China. There are concerns that the Chinese authority will use the yuan to nullify any additional trade taxes from the US. Investors were quick to shift flows into traditional safe-haven assets such as gold and the Japanese yen. Gold soared to its highest level since April 2013. USD/JPY is down 3% since the start of the year and the pair could revisit the lows of December 2018. 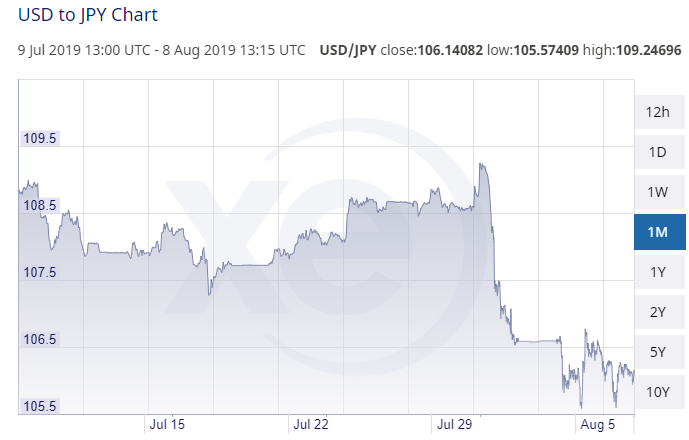 The NA market opens its session with a deceptive calmness today. Commodity-linked currencies take a breather following a battering triggered by a rout in crude oil futures prices. WTI tanked 6% dragging the NZD to its lowest level since January 2016 whilst dollar-cad jumped to a 2-month high. The recent moves were driven by a combo of the new additional 10% tax on Chinese imports, a re-adjustment of the CNY, chops from central banks and growing concerns of a global economic meltdown.  The Dollar Index remains steady and with a light calendar today, we expect currency market to thread the waters cautiously.

GBP/USD was unable to sustain its overnight bearish rebound with the pair now declining towards the lower end of 1.21. There has been no progress in Brexit talks between the UK and the EU, each side is waiting for the other to see who blinks first. The market is enjoying a temporary calmness ahead of tomorrow’s GDP report.

EUR/USD remains inside a consolidation zone around the 1.1200 amidst relative market calmness. All eyes are cast on the ongoing trade tensions between China and the US – with the hope that the parties will resume official talks and the CNY. New tariffs on Chinese imports were swiftly followed by a retaliatory re-adjustment of the yuan. The Eurozone itself is not faring any better with a marked slowdown in the German economy. The pair is expected to be driven by the global market mood in the absence of local data.

USD/CAD vaulted to its highest level in over 2 months after crude oil prices plunged to a seven-month low. However, the pair lost its momentum and made a swift descent to key a long-term technical barrier around the 1.33 figure. WTI crude oil is steady this morning but remains volatile with a negative tilt. Global oil demand could dry up over a slowdown in major economic powerhouses.

The Aussie dollar rose like a phoenix from the ashes back over the 0.68 handle following positive sentiment about Australia's economy, retail, and banking sector by Michele Bullock, the Assistant Governor of the Reserve Bank of Australia. Positive sentiment out of China also boosted the Australian dollar.

The Japanese Yen continues to bask in the sun of safety-haven status, firming below the 106 post. Recent actions from the central banks in the US and EU have prompted investors to review and readjust their positions over growing concerns of a global economic meltdown. The economic slate is light, and GDP report out of Japan later in the day is unlikely to move the needle.