China Ups the Ante in Trade War with Tariff Retaliation

Following President Trump's tweets to Chinese President Xi Jinping, cautioning him and China not to retaliate with tariffs on American products, that's exactly what happened. China slapped $60 billion worth of import taxes on American agricultural and manufactured products. President Trump's administration is claiming there will be suffering on both sides of the dispute. Trump downplayed the impact on American consumers, yet his chief economic adviser, Larry Kudlow disagrees. 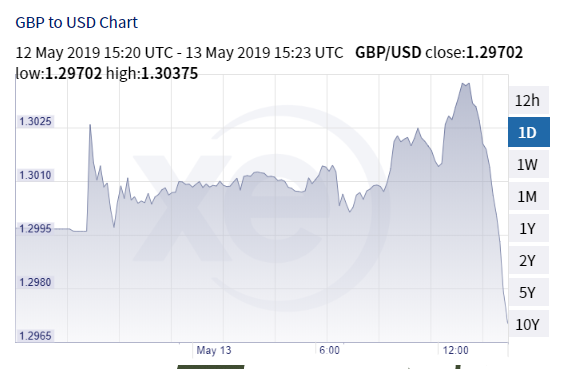 The greenback is down against the yen and the euro but is holding its own relative to most other currencies as trade tensions escalate. USD CAD is clinging to recent gains, while GBP USD sunk just below the 1.30 mark. Whether Wednesday's US retail sales figures will impact the US dollar significantly is hard to predict, however, US-China trade talks seem to have soured in light of tariffs, tweets, and China's refusal to change its monetary policies.

Sterling is sinking against the USD, now below the pivotal 1.300 mark. Media reports suggest there might be a cross-party deal on Brexit, though scepticism reigns, which is keeping the pound at a two-week low.

As China and the US leer at each other and apply tariffs on each others' exports, the euro has climbed up to its highest point since May 1st. EUR USD is in a bearish mood at the moment and now sits around 1.1250.

The Canadian dollar hasn't been able to capitalize on US-China trade tensions, as weakness in oil prices are weighing on the resource-centric currency. Texas Intermediate sits at around $62 a barrel, which is only a small gain.  The loonie has only inched up against the greenback by 60 pips or so.

New Chinese tariffs on about $60 billion worth of US imports are not good news for the Aussie. AUD USD continues to slide lower below 0.7000.

The Japanese yen climbed to a 14-week high due to US-China trade tensions. There aren't any data announcements due until Wednesday this week (US retail numbers) however the safe-haven Japanese currency is appealing to many investors. USD JPY is down to 109.20, down nearly 0.70% on the day.