USD/CAD vaulted above the major 1.33 technical level, following the debacle of oil futures prices. Crude oil is down by 1.75% on the day. Concerns over a global economic slowdown are gathering momentum and pushing central banks to adopt preventive stimulus rate cuts. The Canadian loonie has been steadily losing ground over the past two months, and the BoC could be forced to adopt similar measures to its global peers. 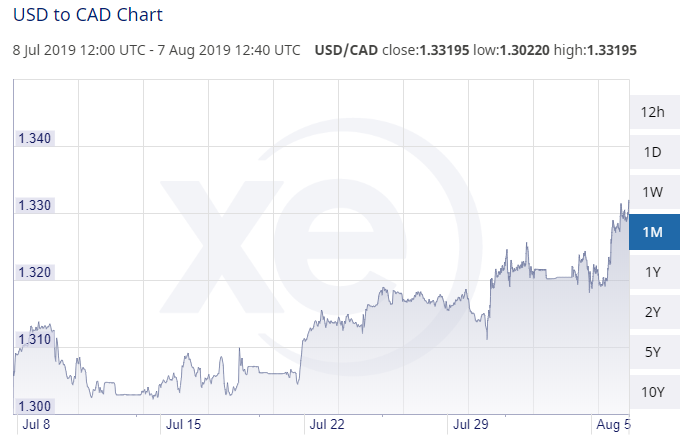 With the global economy diverting towards a lower growth path, triggered by a trade logjam between the US and China, central bankers are starting to use pre-emptive monetary stimulus measures from their toolbox. The New Zealand dollar tanked versus the greenback after the announcement, to its lowest level since January 2016. The Dollar Index is in recovery mode after the recent slide but remains volatile. The economic calendar is light though we expect the market to keep an eye on Chinese trade balance data due for release after today’s market close.

GBP/USD sees a bearish rebound coming to a halt with the pair now trading in negative territory (down 0.3%). Once again, Brexit-related rhetoric continues to dominate the headlines and dictate the direction of the beleaguered currency. The UK and EU are each holding their ground and with a No-Deal Brexit scenario gaining ground.

The Euro is fetching 1.12 US dollars, with the pair entering a consolidation phase, contemplating on the next move. The market is concerned with a flattening in US yields curve amidst a recent escalation in US-China trade tensions and these are weighing on the greenback. Meanwhile, German industrial production recorded a massive drop of 1.5% in June. The data seems to have been ignored, for now, by the market but it again confirms a marked slowdown from the main engine of growth for the Eurozone.

The Canadian dollar is caught between performance in the oil futures market and interest rate divergence USD/CAD has jumped over key long-term technical resistance barrier at 1.33. WTI crude oil is trading lower by 1.6% this morning. Commodity-linked currencies are expected to trade with a negative bias with the recent escalation in trade tensions between the US and China. The Bank of Canada may be pushed, due to external uncertainties, to trigger an insurance cut from the US Fed.

It is a race to the bottom with central bank policymakers either slashing benchmark interest rates or pondering to take similar decisions over their upcoming meetings. The Reserve Bank of New Zealand surprised the market by cutting its Official Cash Rate by 50 basis points to 1.0 percent.

There is now growing fear that we could see an extended trade battle between the US and China. Both sides went for tit-for-tat measures, tariffs on goods matched by swift currency devaluation. Central banks are re-adjusting their tools to cushion a hard landing and investors continue to seek the refuge of safe-haven assets. USD/JPY is staying close to a seven-month low, around the 106 handle as the market keeps an eye on US Treasury yields and Chinese trade data.

Sign Up & Get A Free Fast Quote In Minutes