The US dollar made a comeback over reports that trade talks with China are back on track. The Canadian dollar is ignoring a Chinese ban on its meat products.

The Euro moved into consolidation mode, fetching around 1.1350 US dollar. EUR/USD has strengthened nearly 2.35% this month. Dovish statements from the Fed, trade tensions with China and war of words with Iran pushed investors to safe-haven currencies and assets. The Euro has so far ignored domestic, euro-area economic woes and joined the party of currencies trading higher. The pair now awaits clear direction with month-end portfolio rebalancing trading activities kicking in. 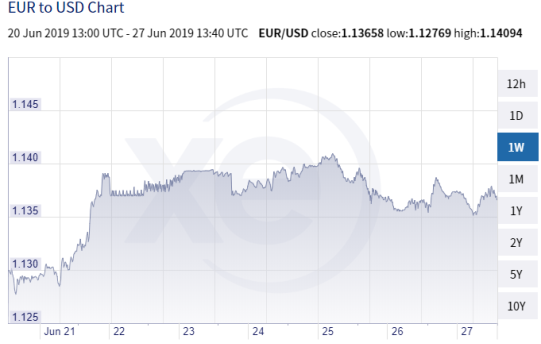 The DXY Index is consolidating near a four-day high as the greenback continues to firm up against low-yielding defensive currencies. Market sentiment is cautiously switching to risk-on on the back of reports that the US and China are close to announcing trade talks are back on track. We're optimistically looking forward to seeing that.

Today, the GDP report card was released by the Bureau of Economic Analysis and showed the economy expanded by 3.1% in Q1 of this year, matching the market consensus. The readings, though advise caution with personal consumption expenditure (PCE) revised lower. The currency market is expected to consolidate around current levels with the G20 meeting as the centre of attraction.

The Sterling is looking for clear direction, trading slightly north of the 1.27 handle. UK and Brexit headlines and noises continue to drive sentiment though the market remains cautious ahead of month end closing. GBP/USD remains vulnerable to a no-deal scenario.

EUR/USD moves into consolidation zone, oscillating around the mid-point of 1.13. The Economic Sentiment Indicator (ESI) released by ECB revealed no new surprise: Sentiment in the euro area remains low with a gloomy economic outlook. The index dropped from 105.2 to 103.3 this month. Exports are pointing lower; manufacturing sector growth remains in the red and service sector is seeing lower demand. In the absence of any major data release today, we are likely to see the pair in range-bound trading.

The Canadian dollar continues to trade with a bullish tone, fetching 76 cents US this morning. The pair is now consolidating around a 4-month low with crude oil prices trading not far off the five-week high. Rising oil prices have been the main driver for commodity currencies despite trade spat with China. We expect the pair to stick to current themes ahead of the G20 summit.

Hold on to your hats, currency fans. AUD USD is currently so close to the symbolic 0.70 rate that currency traders are toasting each passing pip. It currently sits at 0.69557. You go, AUD!

The greenback, as we noted yesterday, made its first attempt to climb above the 108 level. There seems to be a breakthrough in trade tensions between the US and China. This bodes well ahead of the meeting between the US President and his Chinese counterpart. US GDP came in line with market estimates, allaying fears of imminent rate cuts from the Fed. USD/JPY is expected to keep a bullish tone as we move towards month-end.