Canada's Real GDP climbed by 3.7% as data out of the euro bloc continues to send signals of economic distress. The US/China trade war rhetoric calms.

USD/CAD is trading near the lower end of recent trading ranges after the release of a solid GDP report. Real GDP rose 3.7% in Q2 led by rising exports following declines in the previous two quarters. Meanwhile, British PM Boris Johnson is saying that MPs are threatening any possible deal by fighting back against the idea of a no-deal Brexit. PM Johnson announced the suspension of next week's parliament for approximately five weeks, with Queen Elizabeth's approval. 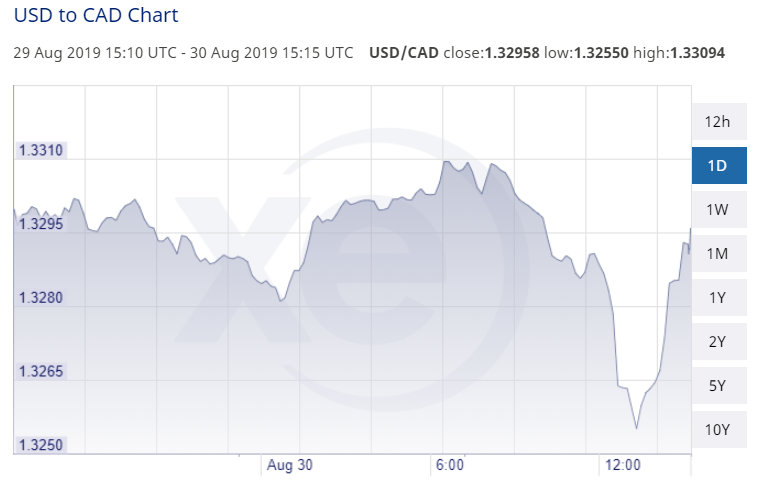 The US dollar is showing little reaction following the release of personal consumption expenditure and income data. The PCE core deflator (the Federal Reserve's preferred measure of inflation) was at 0.2%, missing market’s estimates. The USD Index stayed at a near 2019 high.

Over the past few days, we have seen financial markets responding with Pavlovian effect, after officials from China and the US appear to be toning down the fear of an escalation in trade tensions. As we head into the long weekend, we expect sentiment to turn cautious, with flows preferring safe-haven assets. Gold has moved into a consolidation phase around the $1530 levels.

Sterling bears are sharpening their teeth ahead of the start of Parliamentary session next week. GBP/USD plunged to a six-day low after PM Johnson received royal consent to prorogue parliament in a bid to seek an alternative exit solution. This may also mean a hard Brexit. With all the drama surrounding Brexit, it comes to no surprise that British citizens' confidence is dented. The GfK Consumer Confidence Index declined to minus 14 in August, with all five components of the index decreasing this month.

The EUR/USD pair is trading around the mid-point of 1.10, closing the month in negative territory, as data out of the euro bloc continues to send signals of economic distress. German retail sales dropped by 2.2% in real terms from the previous month adding to a disappointing job report which showed unemployment rising by 4k. Recession fears are growing in the continent's largest economy and this weighing on the euro.

USD/CAD is trading near the lower end of recent trading ranges after the release of a solid GDP report. Real GDP rose 3.7% in Q2 led by rising exports following declines in the previous two quarters. It's the strongest quarter over quarter growth since 2017. On the other hand, household spending slowed to 0.1%. We expect the pair to trade around current levels driven by month-end flows and move into a wait and see mode ahead of next week’s Bank of Canada meeting.

Following disappointing news about new building permits and decreasing private sector credit, the AUD USD is still showing resilience and is currently clinging to 0.673 after slipping a wee bit from 0.674.

Dollar-yen is slowing switching to risk-off mode ahead of the long weekend. The pair retraces from this week top after mixed economic data releases from Japan. Overnight figures showed Tokyo inflation declined to 0.7% in August, unemployment rate better than expected at 2.2% and the preliminary estimate for Industrial Production climbing by 1.3%. On the other hand, retail sales failed to impress, falling by 2.0%. The market will keep an eye on US consumer sentiment and Chinese PMI data before any directional bets.