The Canadian dollar continues to garner little interest, sticking around the 1.33 handle. Market participants seem to be erring on the side of caution during the G7 Summit in France.

The Canadian dollar continues to garner little interest, sticking around the 1.33 handle. Market participants seem to be erring on the side of caution over an escalation of trade tensions that saw the US and China exchanging tariff punches in recent weeks. Crude oil, another key driver for loonie has been choppy but the USDCAD pair has been staying close to the key 200-day moving average. 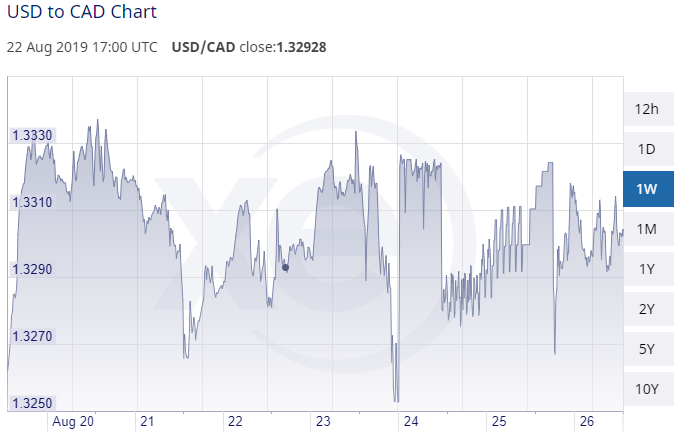 The US dollar is recovering against most major currencies after Friday’s collapse. The market's mood swung back to risk-on sentiment after US and Chinese officials now seem to agree that a prolonged trade tiff is not going to be beneficial for their respective economies. However, in the face of known unknowns, nothing can be taken strictly at face value. Unless we have signatures inked on a trade agreement, we expect uncertainty to cap any further gains with a bias for safe-haven assets.

The G7 meetings were yet another distraction that offered little of substance in terms of improving fractured relationships. The Jackson Hole meeting showed that central bankers have limited power to reign in a world economy hurtling towards a trajectory of escalating trade tensions, tariffs and low inflationary pressures. The headline number for new orders of US manufactured durable goods rose 2.1%, surprisingly beating market estimates whilst core orders slowed 0.4%.

There is little in terms of tier 1 data to be released today. The market is expected to adopt a wait-and-see approach ahead of key US GDP report due for release this Thursday.

The GBP/USD pair is entering a period of consolidation, after touching its highest level in four weeks. The head of states of major European countries seems to have extended an olive branch to the UK by leaving the door ajar, willing to listen to alternatives to the Irish backstop. However, the relationship between the EU and the UK remains rocky. Uncertainty over the shape and nature of Brexit will continue to keep a lid on any further gains in the pound.

The Euro is trading in negative territory versus the US dollar as we start the final week of August. Lower than expected German ifo Business Climate readings, released this morning, is weighing on the EUR/USD. The Index dropped to 94.3 points, below expectations and is now at its lowest level since November 2012. Companies are becoming increasingly pessimistic over medium-term outlook as the country enters a technical recession.

Positive trade sentiments are giving currency investors some reason for optimism. The US President and his cabinet colleagues caused some confusion, as they tend to do, about how well trade negotiations are progressing, if at all. RBA Deputy Governor Guy Debelle will give a speech tomorrow, and it will be interesting to see how the Aussie reacts.

The greenback is having its best day in months versus the Japanese Yen. The USD is up by 0.6%, fetching close to 106 yen after news emerged that the two largest trading partners (China and the US) have agreed to get back to the negotiation table in a bid to resolve their unhealthy trade tensions. While this is a positive move in the right direction, we expect the market to turn cautious as we enter the final week of August.

Moving funds between international accounts?
Sign up for a XE Money Transfer account, and transfer money online 24/7.
You get free online quotes, so you know your costs before you book a transfer.