The British Pound tanked to a three-day low as the market showed their disappointment of a new Brexit extension. Theresa May wrote a letter to the EU President requesting an exit date till the end of June. There are reports swirling that the EU would prefer a longer extension so that the UK MPs can decide on what they want. Meanwhile, business investments are expected to be on hold and the GBP is likely to remain under pressure, closing lower for the third week in a row. 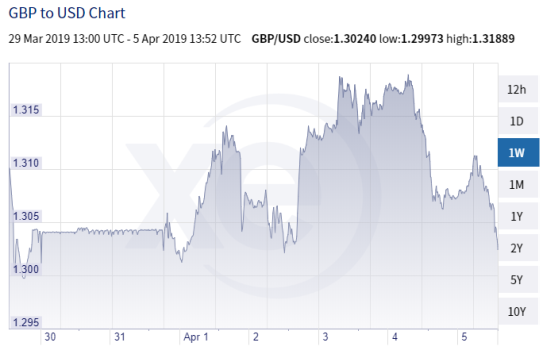 The wait comes to an end as the headline number for US non-farm payroll employment rose by 196k in March, above market expectations (172k) whilst the unemployment rate stayed put at 3.8%. There were also upward revisions for the month of January and February. Average hourly earnings rose by 4 cents, moving the 12-month average increase to 3.2%. The economy continues to report solid job numbers which come as a no-surprise after yesterday’s stellar jobless claims data which fell to a nearly 50-year low. Across the Atlantic, the waiting game continues. The British PM wrote a letter to the EU President seeking a new Brexit extension. The UK MPs still believe they can strike a deal at the last minute after they have exhausted all other alternatives and when faced with the only No-Deal exit option.

The Pound faces more uncertainty after PM May issued a letter to the EU President, dragging the GBP/USD pair to its lowest level in three days. Whilst the US dollar got a boost from strong job numbers, Brexit uncertainty continues to weigh on the GBP. PM May has formally asked for an extension in Brexit till the end of June, still believing that she can gather cross-party support around the “framework for a future relationship”. The letter contains the usual “ifs” and “buts”, implying, therefore, Brexit uncertainty is not going away soon.

EUR/USD is trading inside a tight trading range as the market continues to seek direction. Earlier today, German industrial output came as surprise beating the market’s expectation (+0.7% versus +0.5%). However, it failed to inject long-lasting positive trading activity. Better than expected US labor market report is likely to keep the pressure on the shared currency which is dangerously close to a cliff edge near the 1.12 level.

Canadian labor report remains as volatile as ever. Employment growth came to a halt in March following increases in the previous two months. Unemployment rate steadied at 5.8%. The economy continues to surprise the market with better than expected fundamentals despite external headwinds. The loonie is showing some resilience after the job reports, hovering within the 1.34 handle.

Positive AUD sentiment was underpinned by optimism that the US & China are nearing a trade agreement, surging iron ore prices amid supply disruption concerns, and views that recent good domestic economic data and a moderately stimulatory budget will keep the RBA from cutting rates in the near term.

Dollar-yen was unable to make a significant dent and strong move above the 112 handles. The pair remain close to a three-week high however and the next push is likely to come from the US-China trade deal announcement. Reports indicate that talks are progressing with a promising note. Meanwhile, Japanese household spending slowed down in February, confirming the projections of a moderating economy.