It appears Prime Minister Johnson will have to go with hat in hand to Brussels and ask for another Brexit extension, despite hi reluctance to do so.

It appears Prime Minister Johnson will have to go with hat in hand to Brussels and ask for another Brexit extension, despite his extreme reluctance to do so. After the prospect of a general election was voted down, MPs chanted "No" and "Shame" and showed signs saying "Silenced" at their displeasure that Parliament would be suspended for five weeks.

Before reading on, please watch Ciaran Pennington's 1 Minute Market Update, followed by our Market Overview below. 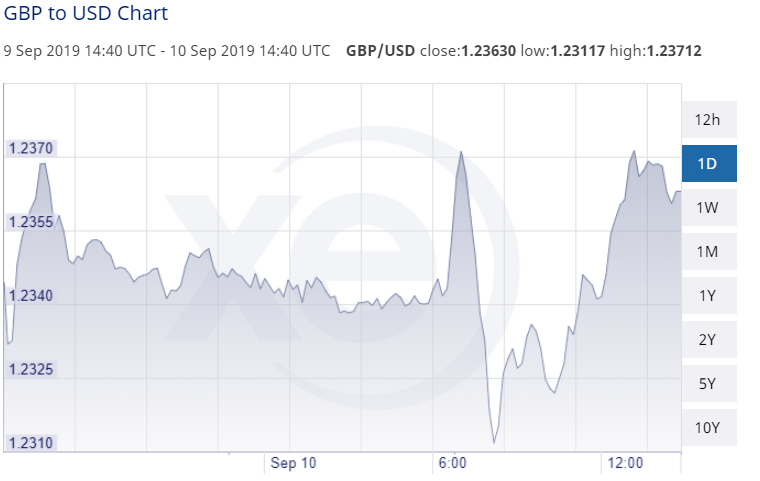 The currency market has moved into a consolidation zone with little movements in overnight trading. FX pairs seem to have been caught up with the final days of summer doldrums. The US dollar index (98.25) stayed flat over subdued risk-on appetite. The economic slate is light, and today’s US JOLTS data is unlikely to move the market. It, therefore, leaves the market vulnerable to heightened risk from the Twittersphere, ahead of key decisions from the ECB and the US Fed. Crude oil futures prices are trading higher (+1.1%) after Saudi Arabia signalled that the country will pursue current oil-rebalancing strategy despite a change in Oil Minister.

The Sterling continues to eke gains against the greenback after PM Johnson failed in his attempt to force a general election. GBP/USD is up 0.15%, as of this writing, deriving support from strong UK employment reports. Data from ONS showed the employment rate was at a joint-highest on record since 1971.

The British All eyes are peeled on the ECB meeting due this Thursday and the EUR/USD pair prefers to stay within yesterday’s trading range. There was little movement following the release of slightly better than expected French manufacturing report. Output moved into positive territory (+0.3% in July) after dipping to minus 2.2% the previous month.

President Draghi could set into motion a new series of QE to support the ailing Euro bloc, leaving new Chief Lagarde to do the heavy lifting when she takes over the hot seat in November. While the move has been priced in, the market is waiting to see the extent and depth of the support plan. The unemployment rate was estimated at 3.8%, lower than a year earlier (4.0%) and unchanged in the quarter. The estimated annual growth in average weekly earnings rose to 4.0% for total pay (including bonuses), and but recorded a fall to 3.8% for regular pay (excluding bonuses). Despite the uncertainty surrounding Brexit, the economy is showing signs of uncanny resilience. The Parliament is now suspended until Oct 14th implying thereby the end-game will be at best, volatile.

The Canadian economy is showing signs of resilience after housing data beat street expectation. Housing starts rose 227k in August and municipalities are issuing more building permits, up 3.0% in July. After strong employment numbers, the CAD firmed further against the greenback. A break below current 1.3150 levels could push the pair to revisit the lows last seen in mid-July of this year.

In the APAC session, the National Bank of Australia reported that the Business Confidence Index in August fell to 1 from 4 in July and the Business Conditions Index dropped to 1 from 2. AUD USD has gone into consolidation mode near 0.6850. The Chinese Producer Price Index sank to -0.8%, which is not great news for the Aussie or the Kiwi dollars.

USD/JPY was lost its momentum after touching fresh six-week high around the mid-point of 107. The Japanese preliminary August machine tool orders recorded a decline of 37.1% year-over-year following a contraction of 33% contraction in July.  Soft data and the risk-on sentiment is likely to weigh further on the JPY over upcoming sessions.