Brexit Uncertainty Endures and Continues to Rock the Pound

Some of the usual gang of suspects are driving the fate of the currency market today. Brexit, Fed announcements, US-China trade tensions. Good times.

The British pound is trading with wobbly feet this morning, down nearly 0.5% against the greenback. GBP/USD has been under sustained pressure from soft economic data, dovish assessment from the Bank of England and lack of clarity (yes still here) on Brexit. Consumers are avoiding extravagant purchases and businesses are avoiding durable investment as fear of a No Deal exit resurfaces. The currency pair is expected to trade with a negative bias and to remain volatile over the coming months. 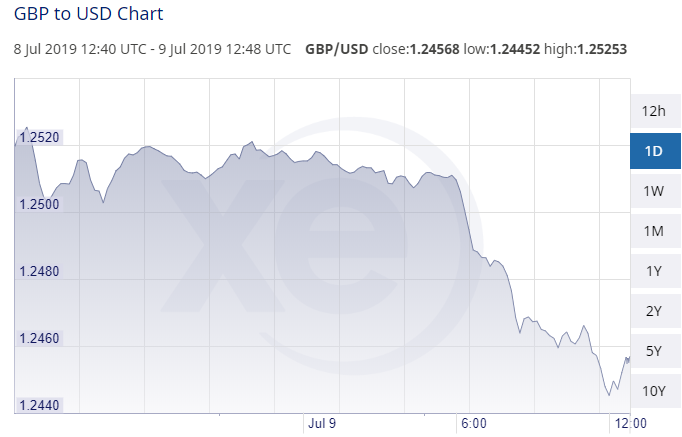 The currency market is relatively quiet as Fed Chair Powell takes the centre stage a couple of times this week. He is set to speak at the Boston Fed today and then appear for his semi-annual monetary policy testimony at the Congress. We expect him not to stray away, too much from his recent comments with the central bank heavily data-dependent. The economic calendar is light today and the US Dollar Index is trading with a mild positive bias. Politics and noises from the Twittersphere may inject some short-term volatility.

The British pound continues its southward journey, down 0.45% this morning and dropping to its lowest level since January.  Once again, growing uncertainty about Brexit and soft incoming data weigh on the currency. Report from British Retail Consortium showed sales decreased by 1.6% from June of last year. Consumers are turning prudent, avoiding non-essential expenses over a lack of clarity in the EU-UK relationship.

The Euro is trading with a negative bias, hanging onto the 1.12 handle this morning. Soft incoming data continues to beset the euro-area. Italian retail was down 0.7% in May according to the latest reports released this morning. This is the fourth successive month with no positive growth and there are growing calls for the ECB to expand its stimulus policy in a bid to revive the regional economies.

USD/CAD is consolidating within a tight range after climbing above the 1.31 handle. There isn't much economic data for currency investors to feed on and recent move can be attributed to recalibration in the market ahead of key event risks: the Bank of Canada's interest rate announcement and Fed Powell’s testimony.

Survey data from the National Bank of Australia showed that business confidence slipped from a 7 to a 2. Despite the unwavering hope that the US and China will come to a trade agreement in the near future, business confidence has weighed down the Aussie, and it now sits at 0.6924 relative to the US dollar.

The greenback further strengthened against the Japanese Yen, now knocking on the 109 post. USD/JPY is up nearly 0.1% today with the Yen biting the dust following a massive drop of machine tool orders (minus 38% year on year). The data series remains deep in negative territory. After yesterday’s decline in machine orders, investors are fearing a severe economic slowdown appearing in the medium term.

"The Guardian view on Brexit: the government has failed – it’s time to go back to the people (Editorial)"by Tiocfaidh ár lá 1916 is licensed under CC BY-ND 2.0