The British Pound plummeted to a four-month low as Brexit talks break down. The US dollar kept a firm tone, shirking reports that US-Sino trade talks are off the table

The British Pound comes in the line of fire again after reports emerged that there we no agreement on way forward for the Brexit plan. PM May is now expected to resign irrespective of the outcome of the fourth vote. The market is currently pricing in a do-deal exit and sentiment turning bearish for the GBP/USD. 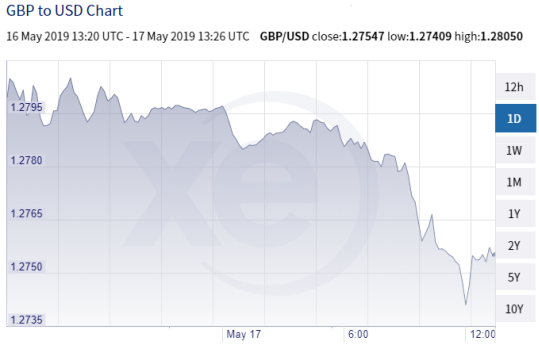 The war of words on trade escalates between China and the US. Latest media reports suggest that the relationship is likely getting a little more strained before officials from both sides resume negotiations. In the meantime, the market is being driven by risk-averse sentiment.  The US dollar consolidated around a two-week high against most major currencies. Traditional safe-haven currencies are still the flavour of the day with the Yen surging 0.2%. There is little in the economic docket for today. FOMC Clarida speaks later on Fed’s policy strategy, tools and practices but is unlikely to sway the market’s attention away from the ongoing trade tussles.

GBP/USD crashes below the key 1.28 level after cross-party talks failed to reach an agreement on the Brexit plan. The market is disappointed with the outcome, and political struggles fail, again, to deliver despite earlier claims of “constructive” talks. PM May is now widely expected to resign but not before putting her Plan for another vote in the House of Commons. The Pound is currently searching a new bottom following the latest developments.

EUR/USD falls to its lowest levels in two weeks, after media reports pointed out that Chinese officials may be pulling out of trade talks with the US.

Escalation of trade tensions increases uncertainty for global trading partners and takes precedence over economic data. Inflation in the EU area rose to 1.7% in April, up from 1.4% in March. Inflation is slowly converging towards the 2% goal set by the ECB and may come into play in the medium term.

The Market approaches the Canadian long weekend with the USD/CAD slowing chipping off at the 1.35 handle. WTI NYMEX is firming near $63.55 a barrel, 0.80% higher on the day and exerting some support to the CAD. The Bank of Canada believes the risk for the domestic financial system has increased slightly since June of last year in part due to uncertainty from global trade policy.

The AUD has experienced a challenging week, and is clinging to levels around 0.69 but is threatening to hit year-long lows. Fortunately, there aren't any new data releases today heading into the weekend. The US-China trade war and tariff volleys aren't doing the AUD or NZD any favours this week, or year for that matter.

Dollar-yen lost its momentum above the 110 level and is now trading in negative territory. Investors are leaning on the side of caution as we move into the weekend. The 10-year US Treasury is trending lower. The focus remains squarely on growing trade tensions between Beijing and Washington, encouraging safe-haven flows.

Sign Up for an XE account, request a free quote, and discover the benefits of contracting XE services.