The Canadian dollar is trading between key technical levels against the US dollar. Investors wait for employment data from both countries, in a bid to assess the health of the neighboring economy. The loonie strengthened to two weeks high following strong rally in the oil futures market.  WTI touched a six-month, gaining as much as 38% since the beginning of the year. 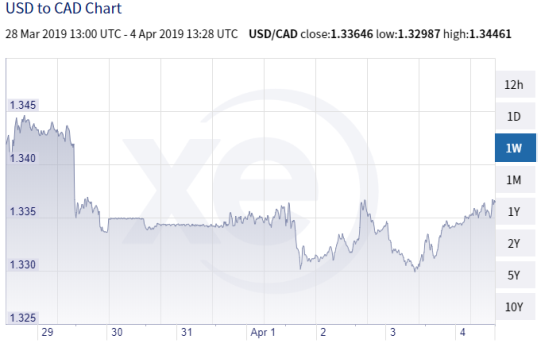 The ongoing Brexit saga continues to sound like a broken record carrying the British Pound lower the morning. GBP is the worst currency performer as the PM tries to re-sell her Withdrawal Plan (rejected twice) in different wrapping to the Opposition Leader. Brexit continues to do nothing else but injects uncertainty and volatility in the market. Meanwhile, there are signs of green shoots of optimism over a trade deal between Beijing and Washington. Equity markets are broadly higher. The US dollar is trading within recent ranges: initial unemployment claims saw a decrease of 10k from the previous revised level to 202k. This is the lowest reading since 1969, which again sends signals of a strong labor market before the release of key NFP data tomorrow.

GBP/USD is trading lower today, down 0.2% despite “constructive” Brexit discussion between the PM and Leader of Opposition. The House of Commons has agreed to prevent a no-deal Brexit: A No-deal exit is most likely to result, in the short term, in a major disruption for the economy. However, the MPs are struggling to agree on the Withdrawal Plan or its various alternatives. So far, they have voted against amendments they do not want. As it stands, the April 12th deadline is fast approaching with no forward guidance and a divided House of Commons. GBP/USD is expected to continue to experience short term volatility.

The euro is shedding yesterday’s gains following a new confirmation this morning that the German manufacturing sector is mired in distress.  New orders for February declined by 4.2% compared to the previous month. Data revealed that domestic orders fell by 1.6% whilst foreign orders fell by a whopping 6.0%. The market is hoping a trade deal between the US and China will unleash global trade optimism and help the global economy veer off the path of a slowdown.

USD/CAD has gone into a consolidation mode, oscillating around the midpoint of 1.33. Investors prefer to wait for tomorrow’s job data before taking any directional bets. WTI crude oil is steady near a six-month high. We expect the pair to remain in current ranges for today, in the absence of any major data.

The AUD has extended yesterday afternoon’s gains following upbeat domestic economic data and finds itself back above US 71 cents having tested 0.7050 support during yesterday’s trading session.

Dollar-yen is stalling near a three-week high amidst risk-on sentiment. The economic calendar is light, and the pair is expected to trade along global sentiment. Two main event risk could come into play: a trade between China and the US and the US NFP data due for release tomorrow. Technical indicators are still pointing to key 112 handles at play.