The US dollar maintains a firm tone relative to most currencies, despite retail sales numbers. PM May insists on bringing the "Old Plan" for another "Meaningful Vote"

The British pound came under heavy selling pressure after reports emerged that cross-party talks are not going anywhere despite claims of “constructive” discussions. Theresa May is expected to bring back her Brexit Plan for a new vote in the first week of June. The outcome is likely to be another defeat and could cost her leadership post. Investors remain nervous with the ongoing uncertainty. 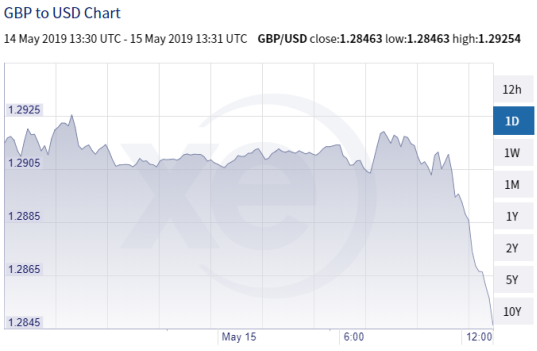 The greenback is holding onto overnight gains as the market continue to assess incoming data out of the US. Advance estimates of US retail sales for April 2019 recorded a decrease of 0.2% from the previous month. There was however an upward revision for the March from 1.6% to 1.7%. A separate survey report saw business activity index climbing eight points.

The Empire State Manufacturing Index now stands at 17.8, its highest level in six months. Firms are more optimistic about the near future, expecting a solid pick up in new orders, shipments and employment. The DXY index is up 0.15% on these headline news and is expected to firm up further against the pound, but remains still under pressure from safe-haven currencies.

Trade talks between the US and China have taken a detour after a recent exchange of trade taxes. Soft data from China are encouraging risk-off trading activities.

Cable is under pressure, down by 0.4% this morning. Cross-party Brexit talks are not leading to any resolution so far and Prime Minister Theresa May has signalled that she will bring her deal back Justin Timberlake style to the House of Commons early June. After three defeats, it is hard to see a different outcome for her Plan. Brexit and the various scenarios are therefore still live and undermining the prospect of the sterling.

Cable is under pressure, down by 0.4% this morning. Cross-party Brexit talks are not leading to any resolution so far and Prime Minister Theresa May has signalled that she will bring back her deal to the House of Commons early June. After three defeats, it is hard to see a different outcome for her Plan. Brexit and the various scenarios are therefore still viable, and undermining the value of the sterling.

The Canadian Consumer Price Index (CPI) rose 2.0% on a year on year basis in April with gasoline prices increasing 10% over the previous month. USD/CAD remains inside recent 1.34 -1.35 trading ranges. The lower oil price (WTI down 1%) is adding a bearish undertone to the loonie.

The AUD and NZD continue to sink as USD and global equity markets reacted favourably on reports the US and China have agreed to keep negotiations going to end their trade despite.

The AUDUSD sits near 3-year lows, excluding the levels seen during the early January flash crash. The odds of an RBA interest rate cut continue to increase while threats to global growth remain.

The greenback is finding it hard to halt its poor performance against the Yen. USD/JPY is trading 0.35% lower on the day. Lower than expected US retail sales and softer data out of China are encouraging safe haven flows into the Japanese yen. The pair is dangerously approaching the key 109 handle, and could attempt to breach beneath the four-month low as investors turn even more cautious.