Brexit: Have We Reached the End Game?

According to Sir Elton John, Saturday night's alright for fighting. Hope that applies to Saturday too, as things will get heated in the house tomorrow.

According to Sir Elton John, Saturday night's alright for fighting. Hopefully, that applies to Saturday too, because things are bound to get heated in UK parliament tomorrow. The House of Commons retakes centre stage over the coming days. In the U.K., PM Johnson hopes to gather enough vote from MPs in the Parliament for his divorce plan from the EU.

After long, painful months of uncertainty, the UK is expected to leave the EU on October 31st. Yet there are still may days between today and Halloween. There might be a Shakespearean plot twist in store when the members are summoned to the House tomorrow. 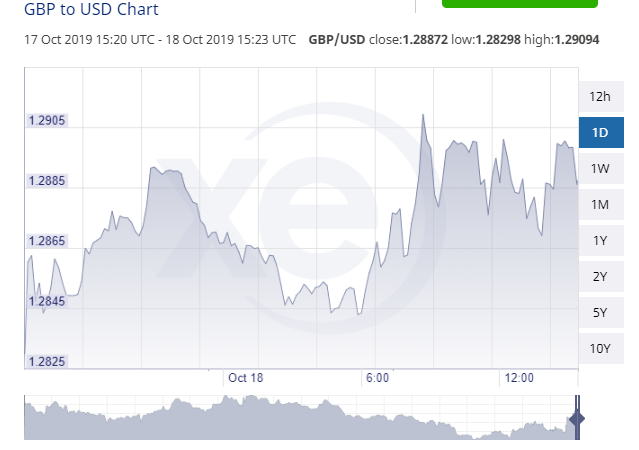 The US greenback is trading broadly lower this morning with investors seek the safety of traditional “safe-haven” assets. With no core data at play, the market leaves itself open to the chirps and cheeps from the Twitterati.

The Sterling sits near a five-month high and all eyes will be on the UK’s Parliament tomorrow. MPs will debate the merits or rather the demerits of the new Withdrawal Agreement reached with the EU. At this point, it is unclear if the said agreement meets the expectations of members. There also uncertainty if the deal will attract enough votes to exit the EU on October 31st. We expect the GBP to remain volatile and there could be a risk of reversals in recent gains. Hopefully, Speaker  John Bercow will be in his usual fine form as he calls for "Order!."

EUR/USD continues to consolidate around the mid-point of 1.11 after the EU endorsed the latest Withdrawal Agreement with the UK and which includes a revised Protocol on Ireland / Northern Ireland, and revised Political Declaration on the framework of the future EU-UK relationship.

The shared currency now holds its breath as this new exit plan is put to test in the UK Parliament this Saturday. Meanwhile, the market seems to ignore the fact that, as from today, the U.S is applying WTO-approved tariffs on certain EU goods. This comes after the US recently won a $7.5 billion arbitration award in the Airbus subsidies case.

USD/CAD is trading near a three-month low over broad-based US dollar weakness. Voters in Canada go to the booth this Monday and if polls are to be believed, we could see a minority Federal government. The CAD has, so far, shown a little reaction from local politics. Investors have stuck to core economic fundamentals and seen the currency appreciate 0.8% over the past five sessions.

The strong job gains and low unemployment rate from a couple of days ago continue to support the Aussie dollar. Not even weaker performance from the Chinese economy could dampen the dollarydoo which now hovers in the mid 0.6800s.

USD/JPY has not moved much in the overnight session and still trading with a slightly negative sentiment. The pair is holding just above the mid-point of 108 and investors wait for development in key event risks – Brexit and ongoing US-China trade tiff. Local inflation data failed to sway investors to take aggressive bets.

Headline consumer inflation data matched market consensus estimate of 0.3%, leaving the door for Bank of Japan to take new QE measures. The North American calendar is thin today and we should see the pair closing the week off a two-month high.

Moving funds between international accounts?
Sign up for Xe Money Transfer and transfer money online 24/7.
You get free online quotes, so you know your costs before you book a transfer.