Brexit Forcing its Way Back into Focus

The pound slumped to a two-month low as the UK Parliament came back from their Easter holidays. This brought Brexit back into the headlines and placed a renewed focus on the fact that the ongoing talks between the Labour party and the Prime Minister had been serious and constructive – but had yet been able to come to any result. 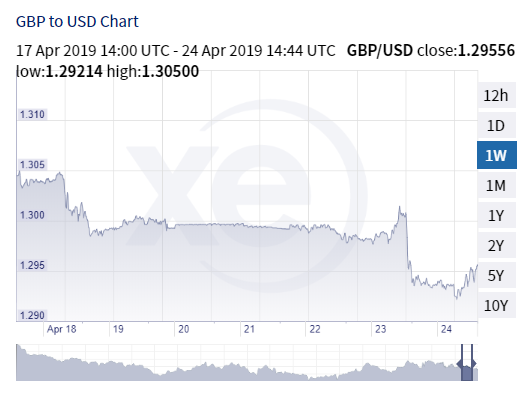 The US Dollar is on the front foot as trade talks between the US and China make some progress towards a better relationship and trading partnership. Today’s direction for the US Dollar has already been dictated by the Peoples Bank of China’s activity in the market overnight.

The pound slumped to a two month low as the UK Parliament came back from their Easter holidays. Brexit is back in the headlines, and it places a renewed focus on the fact that the ongoing talks between the Labour party and the Prime Minister had been severe and constructive – but had yet been able to come to any result.

Reports out in the press yesterday suggested that the PM may look to bring her Brexit deal back in front of the house of commons for the fourth time next week – in a last-ditch attempt before the European elections kick off.

On the data front, today’s focus will be the public sector borrowing and finance numbers.

The Euro is weaker against a handful of major currencies after reports yesterday suggested that the markets are still concerned about the state of the Italian economy and banking sector. This is a long-standing issue and something that will need to be addressed before too long.

Consumer confidence numbers for the Eurozone were released yesterday showing the dismal state of the consumer market in Europe and will place more pressure on the ECB in the months ahead. Today’s focus is the German iFO surveys which have reiterated the poor state of the German economy currently. The Euro is looking vulnerable – against the US Dollar in particular.

The Bank of Canada decided to hold interest rates steady at 1.75 percent, its fourth consecutive decision to stay. Economic growth projections for the second half of the year, including a slower housing market and overall consumer consumption.

The Australian Dollar, which dove 1% against most currencies following weaker-than-expected CPI data out of Australia, which catalysed expectations for the RBA to cut interest rates as soon as its May-7 meeting. The Aussie is at a 7-week low against the US dollar.

USD-JPY has continued to oscillate in a narrow range in the upper 111.0s. AUD-JPY dove by 1%, driven by Aussie-specific losses following lower-than-forecast CPI data out of Australia, which catalysed calls for the RBA to cut interest rates at its next policy review in May.