Boris and Brexit and Banks, Oh My!

The FOMC delivered an expected cut to the US prime interest rate of 25 basis points. The move was already priced in though and the focus will be therefore on the language of the policy statement and forward guidance from Powell’s press conference.

The FOMC delivered an expected cut to the US prime interest rate of 25 basis points. The move was already priced in though and the focus will be therefore on the language of the policy statement and forward guidance from Powell’s press conference. 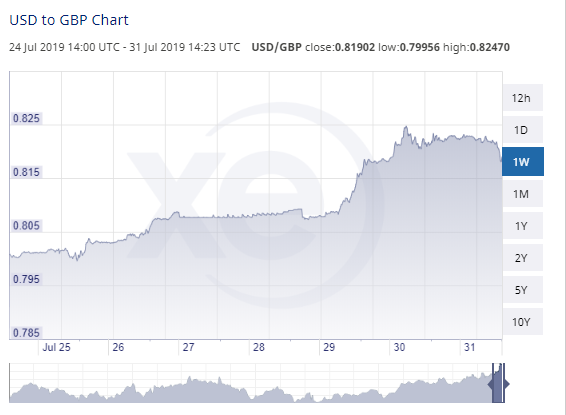 The US Dollar Index currently sits atop a nine-week high, whilst the British pound remains under pressure trading close to the two-year low against the USD. Month-end flows are also in play. We expect volatility to go multiple notches higher after the key announcement and during the FOMC press conference.

The fate of the Sterling remains at the mercy of Boris, Brexit and the Bank of England. The country has a new PM but facing the same old issue - how to exit the EU without causing an upheaval. With less than 100 days to go, the likelihood of a no-deal Brexit has increased sending the pound into a downward spiral. Recent moves in GBP/USD are overstretched and we are likely to see a bearish rebound but the key level of 1.20 is likely to be tested over the coming sessions.

Eurozone economies slowed down by 0.2% in the second quarter as per the latest GDP readings. In Q1, the bloc expanded by 0.4%. Inflation also remained low in July at 1.1%, down from 1.3% in June. The near-term outlook points to more downside which should encourage the ECB to act sooner than expected. EUR/USD stays close to 2019 low with Euro bears likely to limit any further upside.

The Canadian economy expanded by 0.2% in May, rising for the third consecutive month. There healthy gains in the manufacturing sector (up 1.2%) and the construction industry grew 0.9%. The incoming data points to a steady return to potential. The headline number also sent encouraging signs to CAD bulls to push the USD/CAD pair towards the lower end of today’s trading range. We expect the market to challenge the long-term support line near 1.31 figure.

The Australian CPI was positive, yet the Australian dollar didn't get much love from investors and AUD USD is hovering around the 0.69 mark. It is kind of a slow day for the greenback too so, let's not be too hard on our friend Aussie.

Members of the Policy Board of the Bank of Japan voted by a 7-2 majority to keep the country's monetary policy unchanged. Inflation remains stubbornly low despite signs of economic expansion and tighter labour market.

Japan's central bank is expected to stick to its current policy “for an extended period of time, at least through around spring 2020” given growing external uncertainties. It has also signalled that should the economic conditions change and take a bigger detour, it will expand its easing measures. USD/JPY is expected to stay inside yesterday’s trading range as we wait for the Federal Reserve decision.
"Boris in his coat of many colours" by muffinn is licensed under CC BY 2.0