The Australian dollar is trading at its highest level in a week, strengthening nearly 1% today. Investors welcomed better PMI reading from China, better performance in building approvals and strong labor market (unemployment rate at 4.9%). Chinese manufacturing and services sector is moving into higher gears and this bode well for the Australian economy. 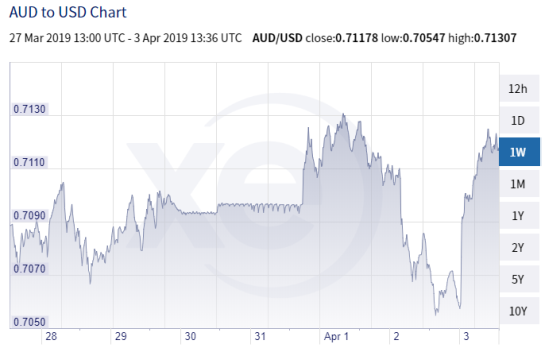 Markets are in a buoyant mood this morning with global equity indices trading in positive territory. Investors received a boost after Caixin China PMI data sent a strong signal of increasing activity at the end of Q1. The print came at 52.9, up from 50.7 in the previous month. The economy seems to be making a recovery after hitting a recent soft patch. Reports that the US and Chinese officials are meeting to put final touches to an imminent trade deal have encouraged risk-on trading activity. The AUD has strengthened nearly 1% on the news and fueled by strong activity in the commodities markets. Oil prices extend its gains, posting a fresh five-month high at $62.98. Twitter feeds from the White House has been unusually quiet despite WTI closing on a 38% gain so far this year.

The British Pound continues to rally for the third session in a row, mainly on renewed hope that the House of Commons will find a solution to the current Brexit deadlock. After all, it takes two to tango and Theresa May is hoping that working with the Leader of Opposition will result in a positive outcome. We expect more indicative votes in coming days before Britain asks for an extension of Article 50.

EUR/USD has made a dramatic U-turn after slipping below the key 1.12 level yesterday. The pair is now trading in positive territory after reports showed the German services sector remains resilient despite recent soft data. PMI edged higher to 55.3, its highest reading since last September. Meanwhile, the Eurozone PMI dropped slightly confirming a moderation of the bloc. We remain cautious on the Euro despite today’s move which can be attributed to profit-taking activity ahead of US job data due for release this Friday.

USD/CAD is trading lower, down 0.25% as we move into the North American session. WTI crude has been the main driver behind the move with oil prices touching a 5-month high. OPEC supply reduction and recent sanctions from the US administration continue to exert pressure. Investors will be closely watching for the EIA inventory data due for release later today which will help to assess the ongoing re-calibration in the market.

See today's highlight for news on the Australian dollar.

The Japanese Yen is sliding lower with the dollar-yen touching a two-week low today. The pair has finally broken recent sideways movement as investors reduce their bets on the imminent recession and turn bullish on the ongoing Sino-US trade talks.  USD/JPY has now set its sight on 112 handles.