The Canadian loonie found firmer footing ahead of tomorrow’s employment data. The USD/CAD returns to its recent trading range between 1.34 -1.35. General US dollar weakness triggered by dovish statements from the Fed has been the main driver pushing the pair lower. However, we expect any further downside moves to be limited as crude oil tries to stabilise after dropping to its lowest level in five months. 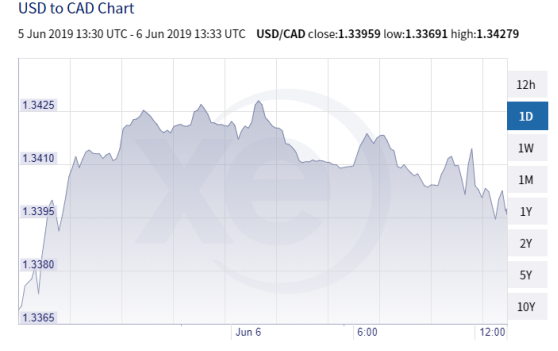 The greenback is under heavy selling pressure today as the North American market opens. The EUR is a star performer after the European Central Bank voted to keep rates unchanged. The move was widely anticipated. The Governing Council, however, believes the current policy is set to stay longer, “at least through the first half of 2020” to support growth in the Euro bloc.

As the market continues the digest the incoming news, the US dollar moves into negative territory. Fresh data showed unit labour costs in the non-farm business sector decreased by 1.6%. The four-quarter rate is now at its lowest since 2013. After Powell’s recent dovish comments, the market is now pricing in a shift in monetary policy with an imminent rate cut on the cards. Once the dust settles after the ECB decision, we expect the market to move into consolidation territory ahead of key US non-farm payrolls data tomorrow.

GBP/USD is trading in a positive zone, riding on broad-based US dollar weakness. There was no data out of the UK and the pound is trading along with the general market sentiment. Brexit has taken a back seat for now but with the race for the PM seat wide open, we expect volatility to return in the coming sessions.

EUR/USD is trading 0.6% higher after ECB Chief Draghi sounded surprisingly optimistic in his press conference. The Governing Council of the ECB kept interest rates unchanged in a widely anticipated move. Draghi believes recent economic data isn’t “not bad”, with a low probability of a recession, despite ongoing global trade tensions and Brexit uncertainty. While the market continues to assess the incoming news, we expect the shared currency to be choppy, with a cap of further gains around 1.1300.

USD/CAD is losing ground after the release of softer non-farm labour productivity this morning. The pair returns to oscillate around the 1.34 handle, looking for clear direction. Investors wait for key employment data due for release tomorrow before committing to further trading.  WTI crude oil remains an outside driver and is currently steady around $52.00 after crashing to a five-month low.

The Aussie dollar is holding its own relative to its American counterpart following the recent interest rate cut. As the US dollar softens on Trump's tariff-a-palooza and other challenges, the Aussie is making hay while the sun shines upon its shores.

The Japanese Yen is trading on firmer ground following the releases of lower than expected US data. Non-farm productivity has stalled, and unit labour costs missed market estimates. We expect the pair to move into a consolidation mode around current levels ahead of tomorrow’s US employment data. FOMC member Williams speaks later today and any dovish tilt will likely inject more selling pressure on the US dollar.