The Bank of Canada lived up to expectations with by holding the overnight interest rate at 1.75%. The Brexit rollercoaster continues,

The Bank of Canada lived up to expectations with by holding the overnight interest rate at 1.75%. The BoC statement acknowledges that business investment has weakened and world trade has contracted as a result of the US-China trade war. Yet it said the Canadian economy had a strong second quarter which exceeded expectations, and the 2% inflation number was right on target. 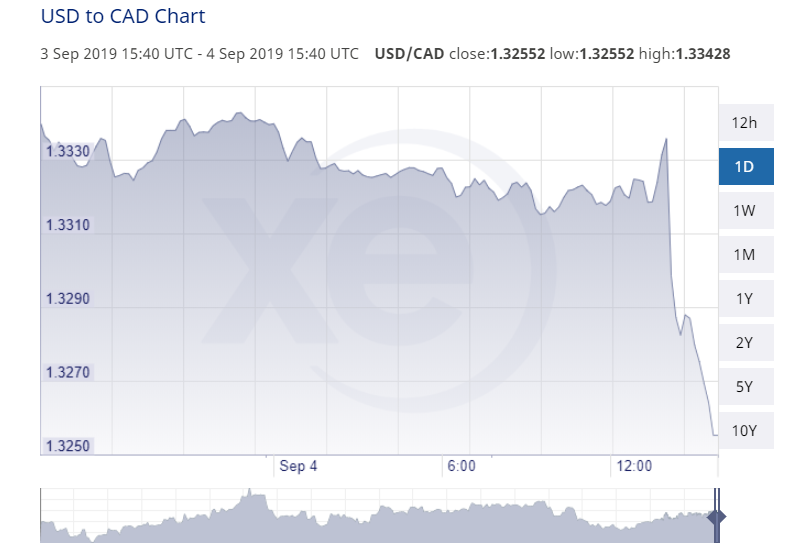 US dollar bears are out of the woods following the release of lower than expected ISM PMI report card. The index saw a contraction to 49.1, the lowest reading since January 2016, sending fears that ongoing trade tensions between China and the US and a series of taxes are starting to take its toll on the wider economy. The greenback retreated versus most major currencies with the Sterling swinging to the upside. The focus today will be on speeches from several FOMC members, who seem to be divided on the next course of action by the Fed. The risk-off sentiment is expected to prevail during today’s session.

Sterling registered wild swings yesterday, bouncing back from its lowest level over the past three years after UK MPs voted to defeat PM Johnson’s exit strategy. British lawmakers may now seek an extension of the Withdrawal plan to avoid a no-deal Brexit. The outlook is highly volatile as several scenarios can play out with ongoing debates in the parliament. We expect developments around UK-EU exit to continue to have major influence on the GBP/USD pair.

The euro-dollar climbed above the key psychological level of 1.1000, showing a bit of over-reaction, supported by slightly better than expected PMIs across the Eurozone and a general US dollar weakness. ECB President-Elect Lagarde is also said to believe that further accommodative monetary policy may be required to avoid recessionary pressure. The US dollar is trading with a soft undertone following a contraction in ISM Manufacturing PMI.

As widely expected, the Bank of Canada maintained its target for overnight rates unchanged at 1.75% today. The Governing Council sees heightened risks due to an escalation of US-China trade conflict and is now forecasting a slowdown in economic activity in H2. The market is already pricing in Halloween rate cut of 25 basis points. For now, USD/CAD is trading near the lower end of recent ranges. USD CAD closed at 1.32552.

AUD USD continues to be influenced by trade tensions between the US and China. The Aussie doesn't seem to be headed for a freefall, yet July's drop in the business confidence rate from -52.3 from -44.3 isn't helping matters.