A Foreign Exchange Superhero: The Origin Story of the XE Currency App

The origin story of the XE Currency App for iPhone began ten years ago, not long after the launch of the iPhone App Store. The hero expats need and deserve

Did you see Captain Marvel, Shazam, or Aquaman this year? If so, you are undoubtedly familiar with the classic superhero origin story genre. I won't even ask if you watched Avengers: Endgame - because, who didn't?

The first (and perhaps the best) epic tale of this genre was Christopher Reeve in DC's Superman film in 1978. Baby Kal-El narrowly escapes his doomed planet Krypton in a spaceship when Krypton's red sun is going supernova. Most children and even adults know Superman's origin story almost as well as their own these days.

The origin story of the XE Currency App for iPhone began ten years ago, not long after the launch of the iPhone App Store. XE was already the world's most trusted currency authority in 2009, and employed just under twenty people in Newmarket, Ontario, Canada. XE.com was already established as the internet's favourite currency website, and the website itself ranked among the 500 highest on the internet as far as volume of traffic.

The creators of the XE Currency app set out to create an engaging mobile interface into the trusted currency data it had introduced to the world over a decade before. It quickly became the planet's favourite mobile international currency information source.

The mobile app enables users to compare mid-market rates for over 170 international currencies, (and precious metals), faster than an Angry Birds (which debuted that same year).

XE Currency was enhanced to enable our customers to check the latest currency exchange rates, set rate alerts for specified rate values, and transfer money worldwide. No need to switch apps, or jump to a mobile browser. Check out the preview video below to see all that you can do with XE Currency, starting now.

If you've been using the XE Currency app on Android or iPhone already, you simply need to upgrade to the latest version to have all this functionality in the palm of your hand. If you’ve enabled automated upgrades, you can start using XE Currency to initiate transfers now.

Much like the frequently-upgraded tools and gizmos on Batman's utility belt, or Tony Stark's most sophisticated Iron Man suit - our foreign exchange superhero just evolved significantly to power your international lifestyle and pursuit of international business growth. Truly next-level stuff.

Within the first year, the XE iPhone app was downloaded one million times and has exceeded 70 million downloads as of 2019.

There was already a Blackberry Currency App before the iPhone version debuted on the Apple iOS App Store. The Android equivalent would follow shortly thereafter.

XE.com had been in operation for sixteen years by then, which was just a couple of years older than Clark Kent when the Smallville TV series started. Smallville lasted ten seasons. The Farmer (as in Beric Farmer, one of XE's founders) farmhouse where XE was born was much like a Canadian doppelganger of the Kent ranch.

Coincidences? Perhaps! (But perhaps not!)

Batman has Robin, Ironman has Spidey, and XE Dev Team Has the UofW Co-Op Squad 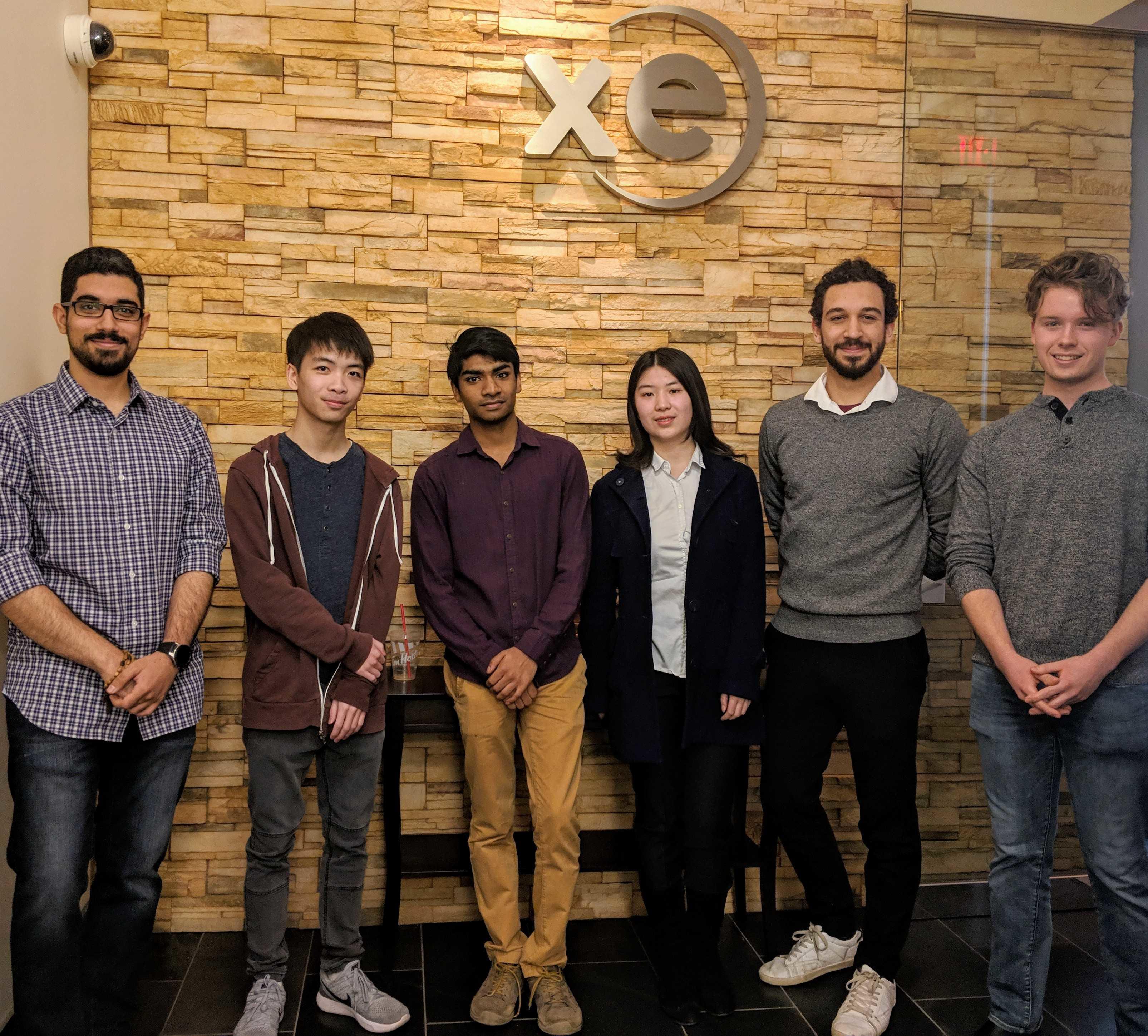 The Current Members of the 2019 UofW Co-Op Squad on their first day. Behind every great app is a great team of developers. Not quite the X-Men, but mutants don't (generally) know how to code. And the X-Men are (probably) fictional characters.
The original iPhone app was primarily developed by a University of Waterloo co-op student, with the assistance and guidance of seasoned XE development leads. Over the years, many U of W co-op (interns for our friends in EU, Australia and the UK) students have designed, developed, and tested the latest updates, versions, and functionality for our XE currency app portfolio, which includes:

OK, there's actually no such thing as an iUtility Belt (yet). But when there is, we'll surely have an app for that. The XE Currency App is also available for Windows, Windows Phone, and Blackberry. 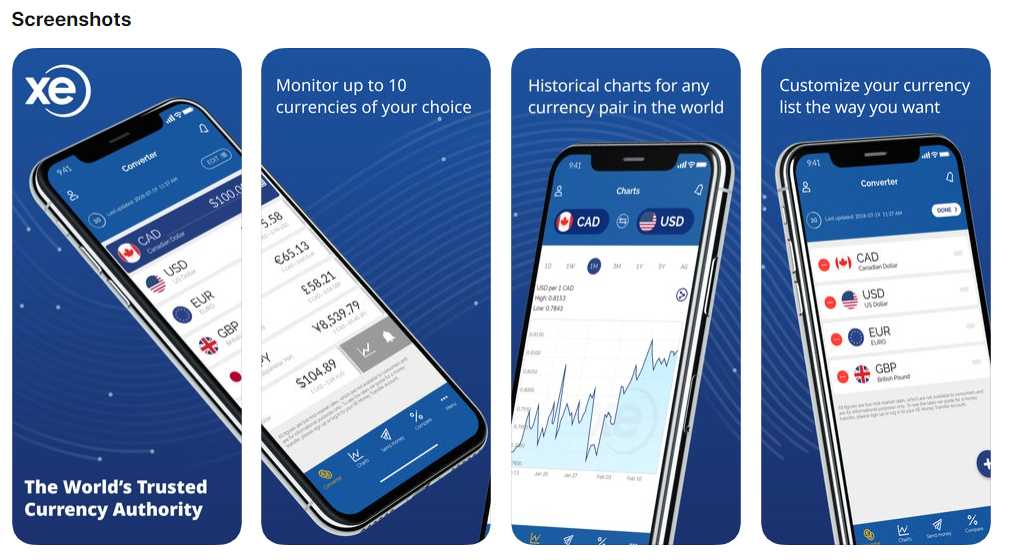 Our co-op teams (including the one above) are all very smart and talented. However to delegate the power of developing the XE Currency app is a lot like Thor entrusting Captain America with his mythical hammer, Mjolnir. That's why we've partnered our co-op team with XE developers like Erik Traikov. Erik has been an XE developer for seven of the ten years the app has been available for download.

With a name like Erik, you might think Traikov might be an Asgardian himself, however that has not been confirmed (or disproven) as of publishing time. Erik is a graduate of the University of Waterloo. He, too, was a co-op student before he joined XE as a full-time employee.  Erik was happy to be hired on to XE as he was happy to be part of the XE team, it provided him with full-time employment immediately following graduation, and he didn't have to endure job interviews at other companies.

Erik was involved in building key functionality for the Currency app, including the Charts and Rates function, and helping to merge the iPad and iPhone application into a unified iOS app. The most significant change Erik has noticed as an iOS mobile app developer over seven years is how much faster it is now for Apple to approve upgrades and patches. Where it once took up to two weeks for the app to be approved by Apple, it now takes only a matter of hours or a couple of days. 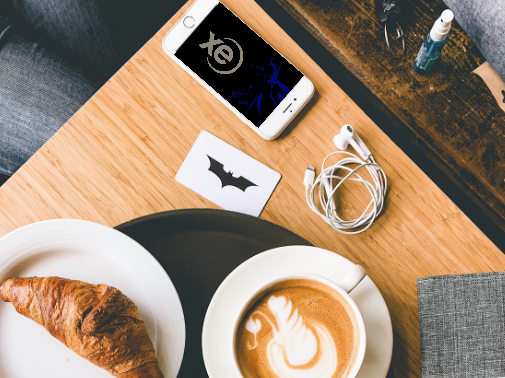 What other app do you know that:

The forces behind the XE Currency App have power to spare, so we pass them on to our users and customers as they live international lives. In the weeks, months, and years ahead, XE's mobile apps will continue introduce new some new abilities and power upgrades. For now, we'll keep them in our not-so-secret app mobile development headquarters.

Looking for an easy to use, proven way to stay up-to-date on the latest currency exchange rates?

Download the XE Currency App for iPhone. If you're an Android user, find XE Currency on Google Play here.