The Australian Dollar is Wobbly after Dovish Comments from RBA

The Dollar Index is near a 12-month high as the market remains cautious The British pound slides below 1.27 handle despite reassurances from PM

The AUD dropped below 0.69 US to a four-month low after Governor Lowe signalled that the Reserve Bank of Australia would “consider the case for lower interest rates” at its next meeting. The central bank believes that a decrease in the cash rate would support employment growth, household consumption growth and the local economy. 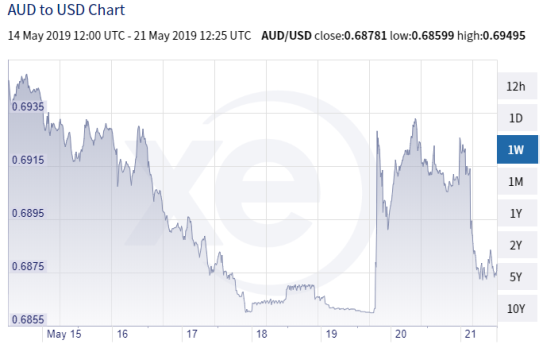 There were no major fireworks after the US Administration rolled back, temporarily, some of the recent trade sanctions. The US-Sino relationship remains tart, and both sides are learning that non-trade measures are a double-edged sword. The currency and broader financial markets are cautious.

The US dollar is near a 12-month high against most major currencies on a trade-weighted basis. In the absence of any significant data release due for today, we expect general guarded sentiment to prevail and dictate the pace and direction of major currencies. OECD forecasts provided familiar echoes that trade protectionism is bad, and the global economy will be hit with further downgrades.

The pound sterling remains under pressure, near a four-month low against the USD, amidst Brexit uncertainty and broad-based US dollar strength. PM May is clutching to the last straw in trying to get her deal through to a fourth vote. Cross-party talks have collapsed, and divisions within her party are weighing on the GBP, with a no-deal exit looming on the horizon.

The Euro is regaining some composure after dropping to a three-week low against the greenback. The economic calendar is thin today, and the EU Consumer confidence index is unlikely to provide any significant trading impetus. The market is expected to stay at current levels ahead of the ECB minutes and EU parliamentary elections.

The Canadian market opens today to find the USD/CAD waddling within recent trading. The pair is oscillating around the 1.34 handle, with rising crude oil prices providing some support. We expect the pair to remain sensitive to trade tensions raging outside and to trade with a cautious tone ahead of the Canadian retail sales results, which are due out tomorrow.

The big news in Australia is the RBA announcement. As the Aussie dollar sinks below 0.69 against the greenback. The most positive news is that China is considering suspending trade with countries that refuse to supply Chinese device manufacturer Huawei.

The Yen continues to strengthen against its US counterpart as trade tension prevail. USD/JPY is trading around the mid-point of 110 level and waits for clear directions. In terms of data,  Japanese industrial production contracted less than market consensus. Today, the market will keep an eye on the trade balance report and core machinery orders.